Cyclists will have a faster, safer route from Edgewood/Swissvale to Sq. Hill, Greenfield and Oakland. New bicycle-only ramp will be added from Forward Ave to tunnel entrance.

Starting in June, the right lane of the inbound side of the Squirrel Hill Tunnel will become a dedicated bike lane. Due to the increase in bicycle commuters and interest in bike safety, PennDOT will begin a project to convert one lane of the Squirrel Hill tunnel into a two-way bike lane. Cyclists will be able to access the lane via the existing Regent Square ramp and will continue through the tunnel. The bike lane will then continue along 376 East in-bound and will exit the tunnel via a new bike ramp from the parkway to Forward Avenue in Squirrel Hill.

The Pittsburgh Department of Mobility and Infrastructure announced the new plan over the weekend at the Inclusive Innovation Summit. The Squirrel Hill Tunnel bike lane is part of the city’s larger goal to make the roadways more accessible to cyclists. The City of Pittsburgh has worked closely with PennDOT to make this improved bike route a reality.

Currently, there is not a safe way for cyclists and pedestrians to quickly and safely get from the Edgewood side of the tunnel to Squirrel Hill and Oakland. The head of the Department of Mobility and Infrastructure explained that after several studies, “it became clear the best way to connect these two neighborhoods was through the tunnel.” 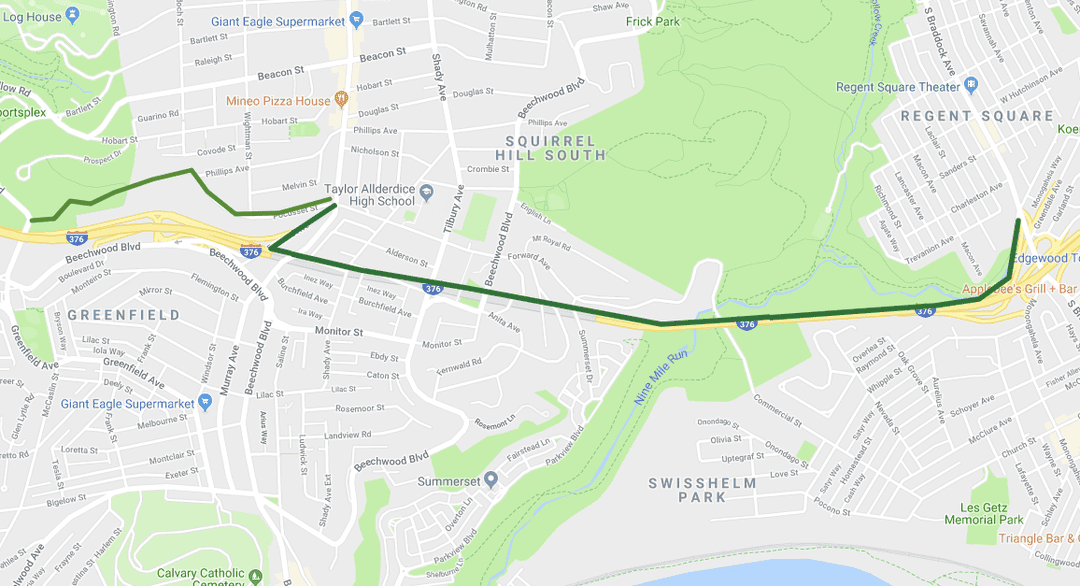 This cyclist was a little bit ahead of time, but soon this will be a dedicated bike lane into the Squirrel Hill Tunnel.

Close as we could get right after they imploded the Greenfield Bridge, which was an awesome sight! @sugarplumscary #Mtb #mountainbike #salsabikes #beargrease #squirrelhilltunnel

PennDOT has acknowledged that the Forward Avenue Bike Ramp may take several months to complete. They are working on a short-term solution to allow cyclists to share the current ramp with traffic until the bike ramp is completed.

The Department of Mobility and Infrastructure explained that the Squirrel Hill Tunnel Bike Lane is Phase 1 in a larger plan to connect to Oakland and Greenfield. The second phase of the project will add a bike lane to Pocusset Street. In 2012, the segment of Pocusset Street that connects to Greenfield Road and the Greenfield bridge was deemed unsafe and closed to traffic. Bike Pittsburgh worked closely with the City of Pittsburgh to transform this into a bike and pedestrian-only street.

Phase 2 of the plan will connect the Forward Avenue Ramp with this section of Pocusset Street, thus providing a safe route from the tunnel to Greenfield or Schenley Park trails.

The Parkway East traffic is notorious for long lines around the tunnels and Pittsburgh was recently ranked #7 on the list of the cities with the worst traffic.

When asked about how this change would impact traffic, the mayor responded, “I hope drivers will remain in good spirits about this change that we believe will have a positive impact on these neighborhoods, hopefully, any frustration will be eliminated as drivers realize this is a plan that was unveiled for April 1.”

History of the Squirrel Hill Tunnel

Resources for Cyclists in the City of Pittsburgh

Bike Pittsburgh is a cyclist and pedestrian advocacy organization. Bike Pittsburgh publishes a Pittsburgh Bike Map that offers bike lanes and the safest routes for cyclists in the city.

Disclaimer: Happy April Fools Day! Thanks for reading all the way down to the bottom. We hope you will stick around and check out some of our other stories, which we promise are totally true and factual.