As we head into Labor Day weekend, here’s a quick look back at some of our favorite (local) summer beers you may have missed.

This week’s edition of ABV brings you – our dear readers – a short and sweet beer recap.

For folks looking ahead to Labor Day weekend, here’s a quick look back at some of our recent beer content you may have missed.

And, depending on what’s available (and where), you can let us guide you toward some local beers for whatever you have planned for the holiday. Cheers!

Fruit Whip flies off the shelves at Cellar Works

We sat down for a Q&A with John Lasher, head brewer at Cellar Works. He’s the man behind a wildly successful smoothie sour beer called ‘Fruit Whip’ – which consistently sells out within minutes of its release. Here’s a look at how ‘Fruit Whip’ came about along with a little preview of Cellar Works’ upcoming expansion.

Learn More: Our story on Fruit Whip from Cellar Works

With plans to open in mid-September, Trace Brewing will offer beer (and coffee from Redhawk) out of a thoughtfully designed taproom in the heart of Bloomfield. They are located directly behind Liberty Beer (inside former concert venue The Shop) and have an all-star crew bringing the brewery to life.

📻 If you're an @npr listener here in Pittsburgh, then you may have already caught our interview with Marylee Williams on @905wesa. ⠀⠀⠀⠀⠀⠀⠀⠀⠀ For folks who missed it, tune in at our #LinkInBio. Fast forward to ~12:20 and hear from our founder, Dave Kushner. ⠀⠀⠀⠀⠀⠀⠀⠀⠀ We walkthrough what to expect from the brewery AND what it's been like to launch during these uncertain times. Huge thank you to @maryleewilliams for the chat.

Four Points is brewing variants of their flagship ‘Fourth Street’

We shined a spotlight on ‘Fourth Street’ – the year-round flagship IPA at Four Points Brewing in Charleroi. Recently, the Four Points team began varying it up – literally. Guests can now find a series of Fourth Street variants, which build off the base beer and receive an addition of different hop strains during the brewing process. This results in new flavors, new aromas and new (semi-regular) beer releases.

Learn More: Our story on Fourth Street and its new variants

How to pair up your carryout beers with (local) takeout food

A few weeks ago, we had some fun researching carryout beers and takeout food options. Here’s what we came up with: six Pittsburgh-area breweries with nearby takeout options. Try one of our suggested brewery x takeout pairings; or make up your own!

There have been many words of praise written about the smooth, soft flagship IPA from Brew Gentlemen. If you’re a fan of General Braddock’s IPA, and miss hanging out in the BG taproom, the beer is now available in sleek, jet black slim cans. Additionally, if you’re not able to make it out to Braddock for curbside takeout, they are distributing General Braddock’s IPA to 37 different bars and beer stores all around the Greater Pittsburgh area. Heck yeah. 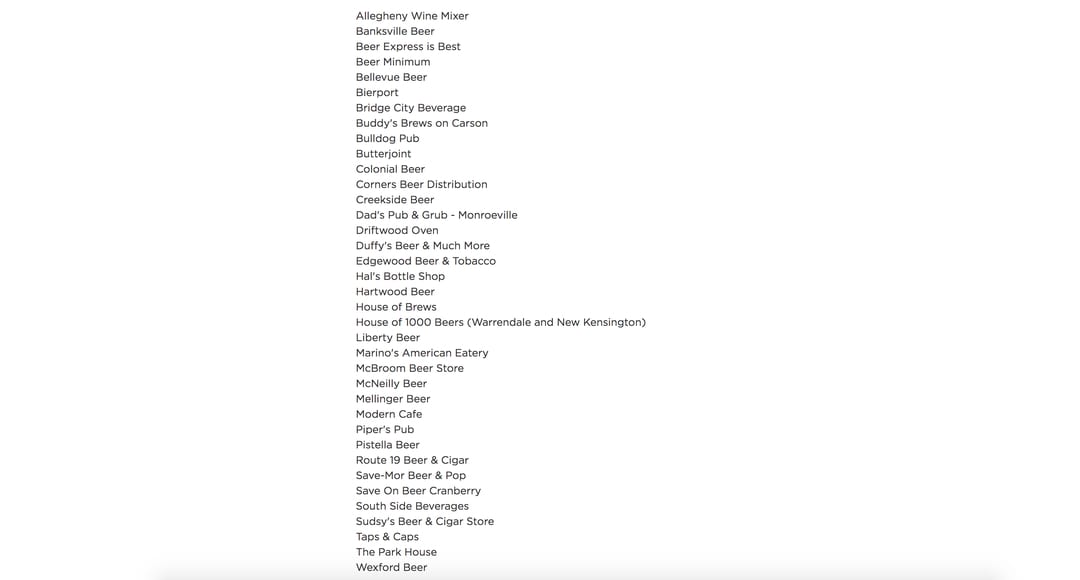