Published on Thursday, May 2nd, 2019
by Emma Diehl

Lace up your sneakers, pick up your race packet and head to the starting line because the Pittsburgh Marathon is fast approaching. Sunday, the streets of the city will be filled with runners. From downtown all the way out to Homewood, the 26.2 mile race might be one of the best ways to see the city. At Very Local, we’ve created a mile-by-mile guide of sights to see along the route because, let’s face it, staring straight ahead and running can get a little boring.

Whether you’re running the race for the first time, or you’re simply a spectator, impress your fellow marathoners with your knowledge of notable buildings and landmarks.

Map of the Pittsburgh Marathon Route 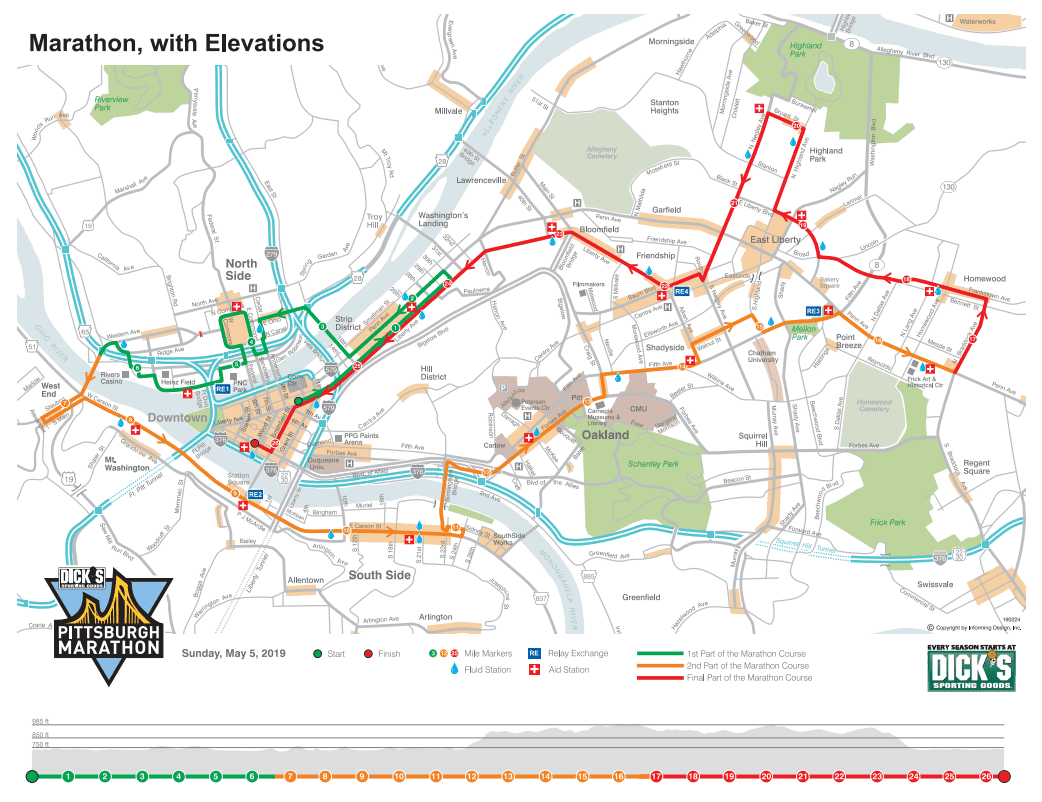 At the start of the marathon, you’ve probably got a lot to look at and consider (make sure those shoes are tied!) Tell your running partners and anyone within earshot about how the full marathon traces through 14 unique Pittsburgh neighborhoods, which is only a fraction of the city’s 90 neighborhoods.

This Nationally Recognized Historic Place was built in 1891 and designed by Pittsburgh architect Frederick C. Sauer. Built during a time when 30% of the Strip District residents were Polish, the church is a blend of Romanesque and Baroque styles.

Founded in 1854, this is one of Pittsburgh’s oldest and largest private clubs. Interested in joining? The club does take members, but you’ve got to be committed to “further choral singing, our German cultural tradition, and good fellowship.” This isn’t just a private club, but a private singing club.

View from the second floor of Allegheny Center Mall on Pittsburgh's North Side, c. 1986. pic.twitter.com/bUiklMvZNd

Better known as “The Fred Rogers Statue” this tribute to everyone’s favorite Pittsburgher overlooks the river from the North Shore. The bronze statue weighs 7,000 pounds and was completed in 2009.

Now an exhibit of the Carnegie Science Center, this Cold War-era submarine completed over 5,000 dives before it was decommissioned in 1968.

Just over a mile from downtown, West End Village was once called Temperanceville. If you want to take a detour, West End Overlook Park is one of the city’s most visited vistas.

If you need a breather, consider a ride up and down the incline – a round trip will cost you $5. Pittsburgh used to have almost 20 inclines, and the Duquesne is one of the final two standing.

Now a popular dining and nightlife destination, Station Square used to be called Little Giant because of the amount of commercial tonnage that passed through it. More recently, Station Square became the first brownfield redeveloped in Pittsburgh.

A nationally designated historical place, the majority of the structures on East Carson were built between 1870 and 1910. If you had been running East Carson in the 1880s, you could’ve hopped on a passenger railway that spanned the street for five cents instead.

A Very Local staff favorite, this family business has been producing pretzels by hand for generations.

A Twisted Visit to The Pretzel Shop

We sent Boaz Frankel to the The Pretzel Shop on Carson Street to meet the 2nd and 3rd generation family members who are making pretzels by hand. Read more about The Pretzel Shop here: bit.ly/thepretzelshop.

The 25 foot-tall glass and tile mosaic welcoming visitors to Pittsburgh’s Uptown was designed by local artist James Simon. The artist says the tree symbolizes the neighborhood’s goals and visions. Simon has also designed welcome signs for Troy Hill and Braddock.

Up until 2005, this public plaza heralding visitors into Schenley Park was actually a parking lot. The plaza has seen its fair share or makeovers; when the space was donated to the city in 1889, it was actually a ravine.

This 1939 photo from the Cathedral of Learning offers a stunning view of how Schenley Park has evolved over the decades– as well as a peek at Forbes Field in the distance.

Thirsty? Look no further than one of Pittsburgh’s natural springs. Howe Spring is just one of three notable historic springs in the city of Pittsburgh.

The five-acre property of lawns and gardens in Point Breeze is home to the Frick Art Museum, the Car and Carriage Museum, and Clayton – the home of industrialist Henry Clay Frick.

Blink and you’ll miss all that still stands of “ketchup king” H.J. Heinz’s estate Greenlawn. Built in 1824 on was once called Millionaire’s Row. The estate was torn down in 1924. All that stands today, aside from the estate’s old carriage house, is a low stone wall and a cast-iron fence on Penn Avenue.

By this time in the race, we wouldn’t be surprised if you’re daydreaming about a post-race (or mid-race) libation. The brewery’s “Big Hop” IPA is a standard on tap at local bars. And if you’re into biking, you might want to mark your calendar for next year’s Pedal Pale Ale Keg Ride, where over 400 riders deliver a single keg form the brewery to a Pittsburgh bar.

Across the street from the brewery is Lincoln Elementary School. In front of the school, you will see a PA historic marker for Mary Lou Williams, who is considered one of the most important women in jazz history. Williams attended Lincoln Elementary School from 1919-1923 and later moved to New York City where she worked with Duke Ellington and Benny Goodman.

Movie buffs might recognize the edifice of St. Peter and Paul Church from the climactic scene from the 1999 film Dogma.

In business for nearly 20 years, we wouldn’t blame you for making a quick stop to pick up some pastries or homemade dream from this Highland Park institution.

This privately-owned 22-room gilded age mansion was built by Alexander King who was a leading importer of English soda ash in the 1800s. Most notable is the 16 ft. high gilded finial that tops the home.

This former synagogue, built 1923, was most recently home to a charter school.

Prolific Detroit architect Albert Kahn designed this building, which was once an automotive dealership. Kahn designed at least seven projects in the Pittsburgh area.

Drinking in church is encouraged in this restored Roman Catholic church that’s now a brewery. Don’t worry, it was deconsecrated in 1993.

You’re nearly there, and here’s Sandy Kessler Kaminski’s mural, aptly called “Welcome to the Strip” to welcome you back. This work was inspired by the sights and eats you’ll find in this famed Pittsburgh neighborhood.

Boston architect Henry Hobson Richardson designed the Courthouse and Jail complex in 1883. Noted for its “simple style” and strength,” building’s jail closed in 1995 and now houses the Common Pleas Court.

A special thanks to Preservation Pittsburgh for their encyclopedic knowledge and help!