A Steel City native, Kenny launched an online beer magazine out of his Shadyside apartment. After 2 years of scaling up in New York City, the Hop Culture team is moving back to Pittsburgh.

At the intersection of journalism and craft beer is a thoughtful, very good listener by the name of Kenny Gould.

A Pittsburgh native, Gould boomeranged south (to Duke University) for his English degree and completed the circuit by returning to the Steel City to earn his master’s degree (at Chatham University).

With a keen eye and an inquisitive way with words, Gould launched Hop Culture – an online beer magazine – out of his Shadyside apartment in 2016.

Our friends at @sheltonbrothers helped us get into a German mood for this photoshoot. Want to drink incredible beer in Deutschland? Join @sheltonbrotherstour from July 25 through August 1st for an amazing trip through Franconia sampling phenomenal, traditional craft lagers and exploring the culture of Germany. Some highlights include the locals-only Kulmbach Beer Week, Germany's 3rd largest festival with liter drinking, dancing, food, and singing along to German oom-pah bands. Plus, a 5-half-liter hike through town and country sampling from 5 different breweries on the trail that ends with dinner at the Weissenohe cloister brewery, which dates to 1050. Need a summer escape from hazy IPA? This is it. Hit the link in the bio for more info. // Kellerbier from Kulmbacher

Hop Culture, a digital daily that drops new stories (nearly) every weekday, shines a spotlight on the exciting people and places of craft beer. The magazine’s three-way focus – beer writing, beer merchandise and beer festivals – has taken the full-time team of four staffers all around the world; but for the last two years, Hop Culture put its roots down as a New York City-based publication.

Per Gould: “(New York) City provided the perfect backdrop for a young entrepreneur trying to write his own curriculum in food and drink.” 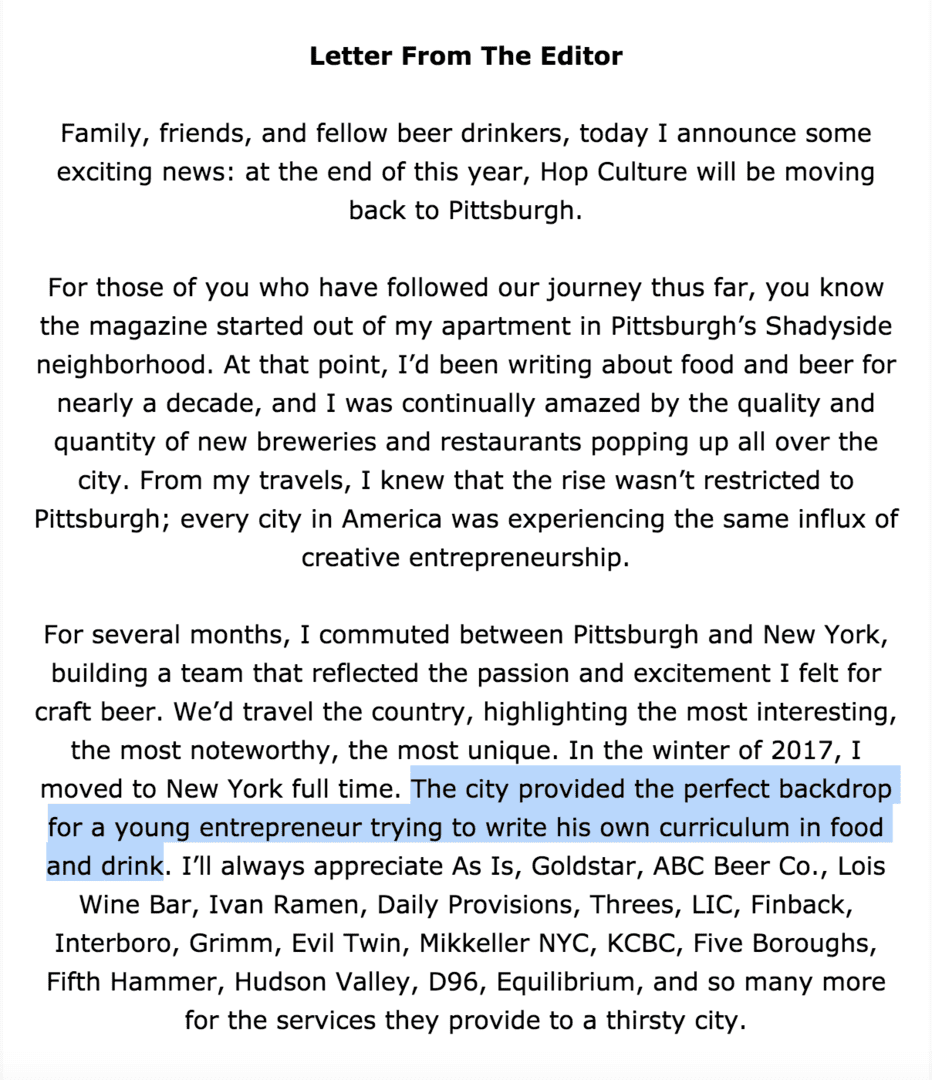 We chatted with Kenny Gould about the Paris of Appalachia and what folks can expect from Hop Culture in 2019 (and beyond).

We went through our Instagram to dig up some of our favorite personality pics because we wanted to share some big news: HOP CULTURE IS MOVING TO PITTSBURGH! To celebrate the move we’re taking 50% off everything in the online store with code ‘BONVOYAGE.’ Hit the link in the bio to get shopping and check our website (hopculture.com) for more info about the move.

Aadam Soorma: What’s the first thing you want to do once you’re moved back and settled into Pittsburgh?

Kenny Gould: I’m going to DiAnoia’s. During the Hop Culture team’s last craft beer festival in Pittsburgh, we threw a brewer’s dinner for our out-of-town guests, and someone recommended we get it catered by Dave DiAnoia. I have to say, Spak Bros on Penn or Romulus Pizza al Taglio in the Strip could give any New York slice a run for its money, and DiAnoia’s was similarly on another level. I couldn’t stop eating that pizza. DiAnoia’s was right across the street from the festival venue, so the day after our brewer’s dinner, I took the team there for breakfast. Then we went back for lunch. And dinner. After every event, our team shares a slice of cake from a local bakery and talks about their favorite moment of the day. The cake came from DiAnoia’s.

In two days, I ate there five times. Everything was a 10/10. And more importantly, the staff was friendly and cheerful. For our own events, we talk about the difference between service and hospitality, where service is getting the job done, and hospitality is how you make people feel while you’re doing it. DiAnoia’s has both.

AS: When you were in NY, what’s something you missed the most about (or in) Pittsburgh?

KG: The weather! I’m joking, of course. There were so many little things I missed about Pittsburgh, from the sight of the city skyline coming out of the Fort Pitt tunnel to my best friend and old roommate, Phil, and his kittens. But the thing I missed most was probably the community. When I last lived in Pittsburgh, I got my RYT-200 yoga teacher training certificate, which was something I’d always wanted to do. I called up Andrew Witchey at Dancing Gnome Brewery and asked if my friend Suzanne and I could teach a yoga class in his taproom an hour before the brewery opened on a Saturday. He said, “Sure.”

The next month, I asked Gary Olden if we could teach at Hitchhiker Brewing and he said the same thing. Just like that, Suzanne and I started a series called Ales and Ohms. We had 40 people at every class doing yoga and drinking beer. We made t-shirts and they sold out, so we made another run. That kind of thing can only happen in a city like Pittsburgh. Try that in New York and someone wants $2,000 for the venue, and another $1,000 for a vendor permit. A small community opens up so many doors for creativity, collaboration, and connection.

AS: What’s something NY has that Pittsburgh does NOT have?

KG: New York is known as the city that never sleeps, and for good reason. I don’t always want to sit on the steps of Union Square at three in the morning and watch a soapbox preacher compete for attention with a dance crew, but sometimes it’s nice. There’s an energy in New York that never stops. It’s palpable. It’s addictive. It’s like that first girlfriend that broke your heart, the one you still think about and remind yourself not to text. Pittsburgh is amazing and good for me in so many ways, but New York has its own energy that won’t stop whispering in my ear. I don’t think it’s seen the last of me.

AS: What’s something Pittsburgh has that NY does NOT have?

KG: An Uber driver named Joey Bunyinz. He gives a damn good tour of the city.

For real though, there are so many things I love about Pittsburgh. Gooskis. Dancing Gnome Brewery. The Penguins. I don’t even like sports and I love the Penguins. And the Steelers. It’s awesome to know that on any game day, I can walk into a bar and share an instant camaraderie with everyone else there.

AS: What can you share about Hop Culture’s plans for the rest of 2019? Can you elaborate on making Pittsburgh a “craft beer playground” and the bar / studio concept?

KG: As I wrote in a recent letter that I published on the Hop Culture website, I’m currently in the process of moving back to Pittsburgh. Our Managing Editor, John Paradiso, is headed to Raleigh, where he’ll offer some much needed coverage of the South. Grace and Olivia will stay in New York, where they’ll put the finishing touches on Beards With(out) Beards, our August 10th festival celebrating the accomplishments of women in craft beer. As of now, they’ll be joining me in Pittsburgh this fall.

In the next few months, I’ll be laying the groundwork for our beer bar in the East End, which is something we’ve been talking about for years. When I started Hop Culture Magazine out of my Shadyside apartment in 2016, we had the goal of curating the best of the industry. The bar allows for that same goal, just in a different format. In the last few years, we’ve met so many amazing brewers from around the world, and I’d love to bring some of that product to my hometown. At the same time, I’d like to bring Pittsburgh product to the world. We have a young food and drink scene, but it has all the ingredients to become one of the best in the country. I’m completely optimistic that three years from now, people will be visiting Pittsburgh just to eat and drink. They’re already coming.

AS: Pittsburgh feels like a city where collaboration is ripe and happens often. Tell us about a food & beverage collaboration that you’ve been inspired by? (Example: DG x Remnant or Eleventh Hour x La Prima or East End x Pizza Boy, etc)

KG: I can’t speak more highly about Mike Potter, who I met through a mutual friend back in 2016. At the time, Hop Culture was just a twinkle in my eye, and Mike was in the process of putting together something called Black Brew Culture. The industry needs more black and brown representation and Mike is the answer. It’s been a privilege to watch him grow his brand. This year, Mike and fellow Pittsburgher Day Bracey are running the second iteration of Fresh Fest, the country’s largest black beer festival. Twenty-five black breweries, fifty vendors, forty-five collaborations, twenty food stations… if you want to see collaboration at its finest, you’ve got to check out Fresh Fest.

AS: As someone who is now officially a “boomeranger” (leaving and returning to Pittsburgh), what advice do you have for others looking to replicate that cycle?

KG: I hate giving general advice. But if anyone has specific questions, they’re welcome to send me an email at kenny@hopculture.com, or reach out on Instagram at @hopculturemag. 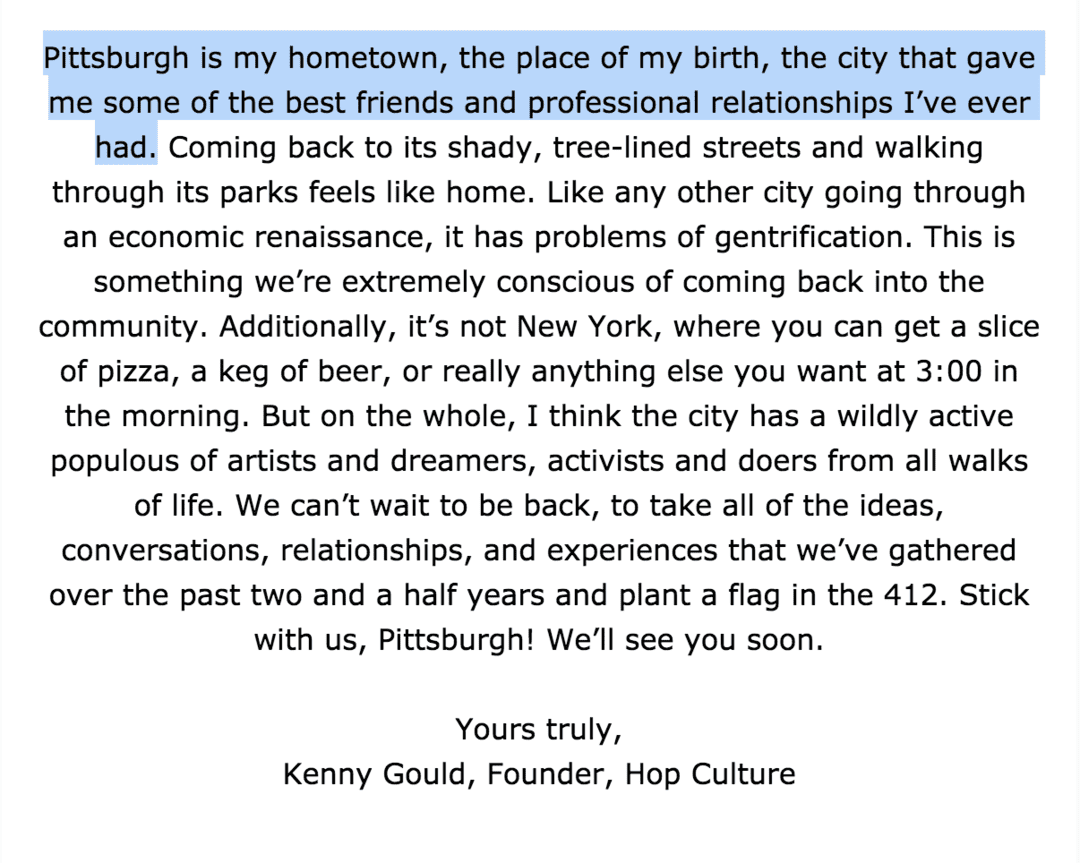 Named for Black cyclist Marshall “Major” Taylor, this nonprofit wants to make sure all Pittsburghers recognize the joy and health benefits of bicycling