Here’s what you can expect at Grist House’s annual outdoor winter party, including the four beers being released AND the food truck lineup.

Cozy up by the fire.

This weekend marks the return of Fire Fest: the outdoor winter party at Grist House.

Who says that you can’t party in the cold!?
We make a point of utilizing our outdoor space all year round. The fire is always rolling for the beer lovers who brave the cold, and we want to celebrate that!

What the heck is Fire Fest?

Put simply, Grist House calls it a daylong “celebration of beer and fire.” And it’s exactly that.

You can head to the Millvale-based brewery on Saturday, Dec 7 (starting at noon) and embrace the winter outdoors. Sit or stand by one of several fire pits and enjoy Pittsburgh’s primarily outdoor (seating) brewery. Bring the pupper too – Grist House is exceptionally dog-friendly and welcomes your four-legged companions.

Fire Fest will be marked with a quad beer release (four beers re-entering the lineup) including a special edition imperial stout that will be released in bottles.

Read on for a quick preview, including a walkthrough of the beer release (AND the stellar food trucks) for the second annual Fire Fest.

🔥🔥🔥🔥⁠⠀ ⁠⠀ Last year for FIRE FEST we released 3 cans, this year we're upping the ante and adding a bottle!⁠⠀ ⁠⠀ We are bringing back three all-time favorite cans for FIRE FEST this year!⁠⠀ ⁠⠀ Black in the USSR is back and ready to warm you up! This rockin' Russian Imperial Stout is pitch black in color, with a creamy tan head and beautiful lacing, giving way to roasted dark malt and bittersweet chocolate flavor that creates bold, deep complexity. ⁠⠀ ⁠⠀ It just wouldn't be a party without Hazedelic Juice Grenade. You know it, you love it, and you can get it at FIRE FEST!⁠⠀ ⁠⠀ We are rounding out the cans with a sour! This edition of Kapow Kandy is built for cold weather and features boysenberry, raspberry, and guava.⁠⠀ ⁠⠀ We are also extremely excited to announce FIRE FEST RESERVE! This Imperial Stout was aged in bourbon barrels that had previously been used by Bissell Maple Farms to age their world-class syrup! ⁠⠀

Black in the USSR: Russian Imperial Stout, 9.5% ABV // Pitch black in color with a creamy tan head, you’ll note the taste of bold, bittersweet chocolate in this roasty winter treat. OG Grist House fans know this stout and know it well. A crowd favorite amongst dark beer fans, Black in the USSR will be available in cans that feature a bear playing the balalaika, a stringed instrument commonly used in Russian folk music.

Kapow Kandy: Fruited Sour, 7% ABV // Since 2018, Grist House has done an incredible job with their approachable, easy-to-drink fruited sours. This particular iteration has been “fruited” with boysenberry, raspberry and guava – expect to taste varying levels of all three.

Fire Fest Reserve: Barrel-Aged Imperial Stout, 11% ABV // This is Grist House’s Fire Fest-specific, special edition beer to commemorate the day. It is also the only Fire Fest release NOT available in cans. Get yourself set up with a bottle of Fire Fest Reserve, a barrel-aged imperial stout aged in bourbon barrels that were previously used to age maple syrup from Bissell Maple Farms. Coming in at 11% ABV, expect a very strong stout, packed with an array of flavors from the barrel aging process.

One of the first Grist House beers I ever had was Black in the USSR – it’s an amazing, straightforward Russian Imperial Stout with a rad naming convention and pretty rad can art for Saturday’s release. I feel confident recommending this to ANY fan of stouts and really ANY fan of beers, to be honest. At north of 9% ABV, it is supremely drinkable for a high-gravity beer. 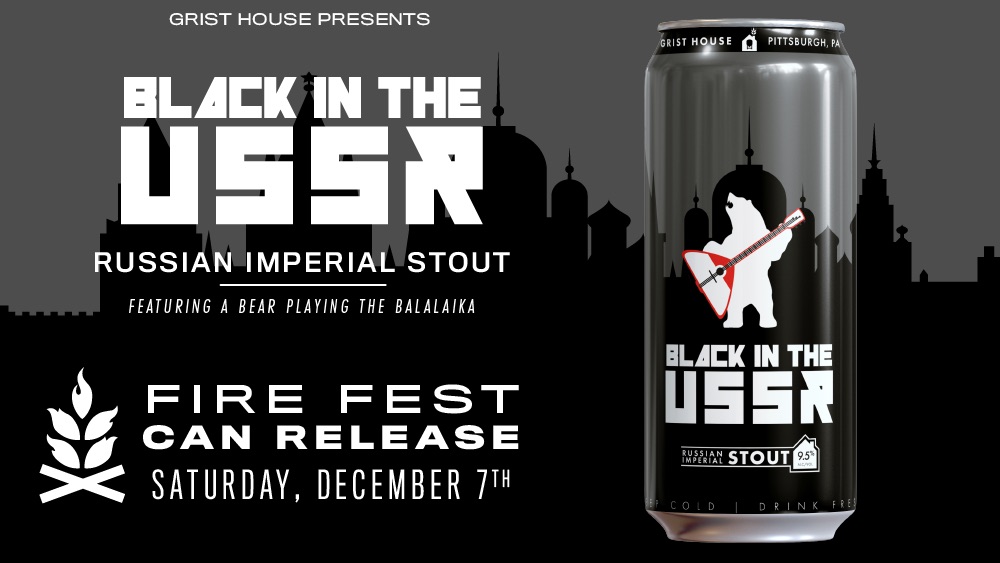 Hungry? Here’s a peek at who will be serving up the eats at Fire Fest on Saturday.

Known for their mainstay, the In-N-Aht Burger, you can’t go wrong with Pittsburgh Sandwich Society.

Their brisket, their ribs, their chicken, their sauces…these guys have built a steady fan base with their mouth-watering barbecue.

The uplifting and fascinating story of how Revival Chili hires men and women who face barriers to employment is a driving force. Jordan and the Revival team seek to foster personal and professional development and give people a fair chance as they re-enter the workforce from issues including homelessness, previous incarceration, etc.

Out at NREC in Lawerenceville on 43rd today! It’s a beautiful day to get some chili 😁 Also, attached is our schedule. Got a big event with Deutschtown on Friday and Saturday!! Cya out there #revivalfam 😍

Yetter’s Candy – a Millvale staple – will be doing a pop-up serving their delicious hot chocolate.

Parking: Plan to park across the street from Grist House in the long, free parking lot adjacent to the canal. You may be able to find some street parking along Sherman Street as well.

Food: The food truck lineup at Grist House is very good and generally VERY accurate. Although the brewery does not maintain a kitchen or any in-house food program, their team does an excellent job booking food trucks that are on-site every single night the brewery is open. Few local breweries can boast such an amenity. Check their food truck schedule here (scroll to the bottom of their homepage) before you go. Scroll up for the Fire Fest food truck lineup.

Interior: More like exterior, am I right? Grist House is super pup-friendly and MOSTLY outside. Dress weather appropriate and enjoy your beers outside. If you must head inside, be advised that it can be tight, cramped and small (depending on the crowds). The outdoor experience here is where it’s at.

Also, it’s fall and – therefore – it is the season of sport. Grist House is deeply supportive of the Penn State student-athletes of sport. Be advised that game day (generally Saturdays) are exceptionally spirited and passionately packed with sports fans of Penn State sports.

Getting to Grist House

Bus: it’s not optimal, but you can take the 1 (or the 2) to Millvale and walk a hefty distance to the brewery.

Bike: If you find yourself cycling through town, I highly recommend biking to Grist House. There’s plenty of bike parking near the front entryway and you’re guaranteed to make friends with others who have pedaled their way to the brewery. There exists a laid back, relaxed cycling community vibe at Grist House on the weekends.

Fire Fest is at Grist House on Saturday, December 7 (noon to 10 pm).

Named for Black cyclist Marshall “Major” Taylor, this nonprofit wants to make sure all Pittsburghers recognize the joy and health benefits of bicycling