This week marks 15 years of GOOD BEER flowing from the team at East End Brewing.

What started as Scott Smith’s one-man operation in 2004 has scaled up to become one of Pittsburgh’s most influential and recognizable names in craft beer.

From December 10 through December 15, you can expect a number of festive happenings at East End Brewing to mark their #FIRST15. Head to the brewpub in Larimer for commemorative swag and merchandise, including some throwback goodies (featuring the old logo) for OG East End fans.

Got a home draft system? You can even snag one of these nifty East End tap handles this week for $15. 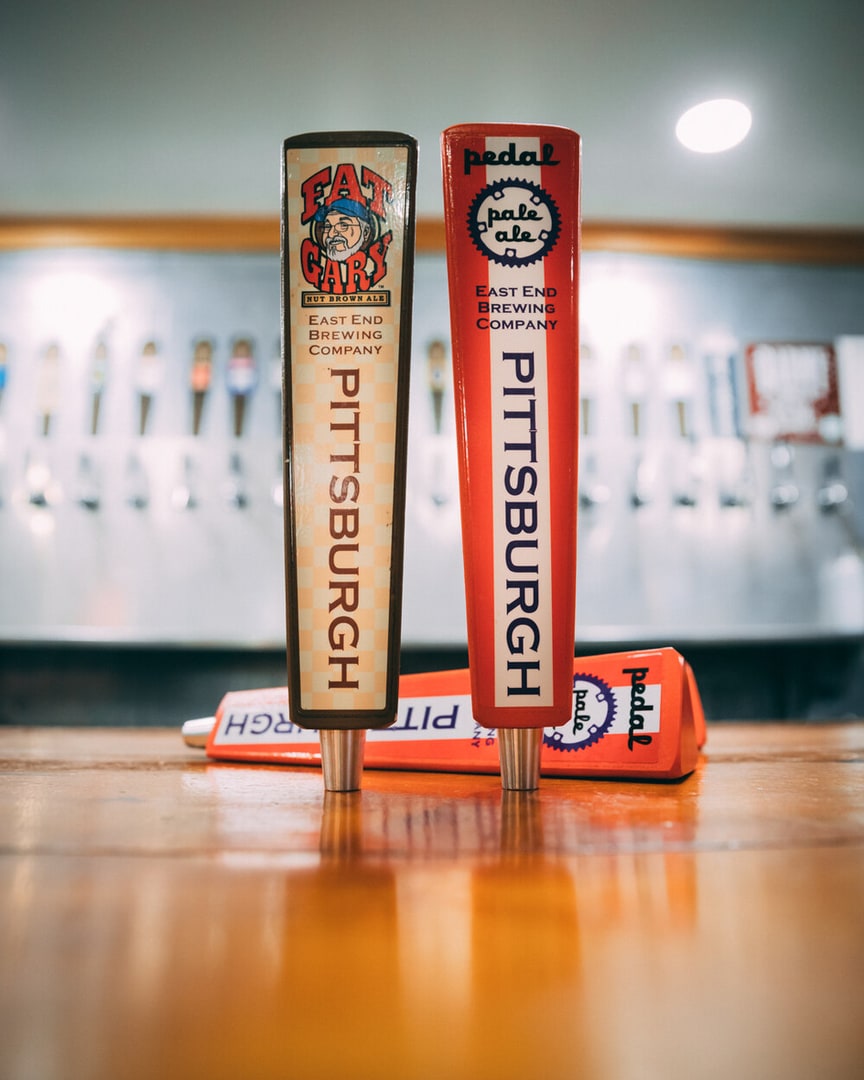 Thursday, Dec 12: Cake Cutting and ‘You Are Here’ Announcement

For folks looking to celebrate on East End’s ACTUAL birthday – aim to be at the brewpub by 7pm on Thursday, Dec 12. At that time, East End plans to do two things:

Our YOU ARE HERE Neighborhood beer series continues with our SOUTH OAKLAND release on Saturday, October 12th from 12-2 pm at Eliza, Hotel Indigo, 331 Technology Drive. SOUTH OAKLAND is a killer aromatic hazy pale ale dosed with Tulsi. Tulsi is also known as holy basil and is a sacred herb used in Indian culture. We've played around with this herb a few times here at EEBC and thought it would work nicely in a hazy/juicy brew. We're tasting blueberry, citrus, grassy, and juicy notes in this one. Come join us and the fine folks at Eliza, Hotel Indigo this Saturday for beer, food and fine views of the river. Come look for us under the yellow tent umbrellas. If rain hits, we'll be inside the restaurant. . . . #neighborhood #youarehere #beer #craftbeer #brewery #pittsburgh #southoakland #beergram #beergeek #hazyipa #paleale

This Sunday is East End’s annual Crafts and Drafts holiday market. The local maker showcase is especially noteworthy because guests (and vendors) are actually set up in the brewing area of East End. It’s a lovely use of the back-of-house, beer production area where guests normally would not be permitted to hang out.

Mark your calendar for Sunday, Dec 15, 12-5pm for the annual Crafts and Drafts Holiday Market in the brewery here at East End Brewing! We've invited a bunch of great local artists & makers into our space to help you find those perfect last-minute gifts while you enjoy some FRESH LOCAL BEER. And come early for brunch or lunch from Larder of East End, who will have a terrific menu on hand for all ages. This event is FREE and family-friendly (with housemade Barmy Root Beer & Ginger Ale on tap), so bring the kids! The list of vendors follows: – Alternate Histories – 2468 Kids – Etna Print Circus – Wigle Whiskey – Threadbare Cider and Mead – garbella – PGH Candle – The Homestead Renaissance – Huffalo – Reconstructing Ideas – Flipping Records & Tapes – nervous thread embroidery – More vendors being confirmed!

Although East End specializes in craft beer, guests visiting during the anniversary week will be treated to something a bit more in the cocktail realm.

Three years ago, East End took a small batch of their in-house barleywine (Gratitude) and partnered up with Maggie’s Farm Rum, in the Strip District. They pumped a batch of Gratitude into an oak barrel from Maggie’s Farm to allow it to age into whiskey.

Just a heads-up, a fundraiser is being held at the distillery Thursday starting at 4pm. We will be open for service to the public as usual, but there will be cover charge donation of $5.

Non-beer drinkers and cocktail fans: this is your chance. Gratitude Whiskey is truly a one-off, small batch party favor you can try this week. 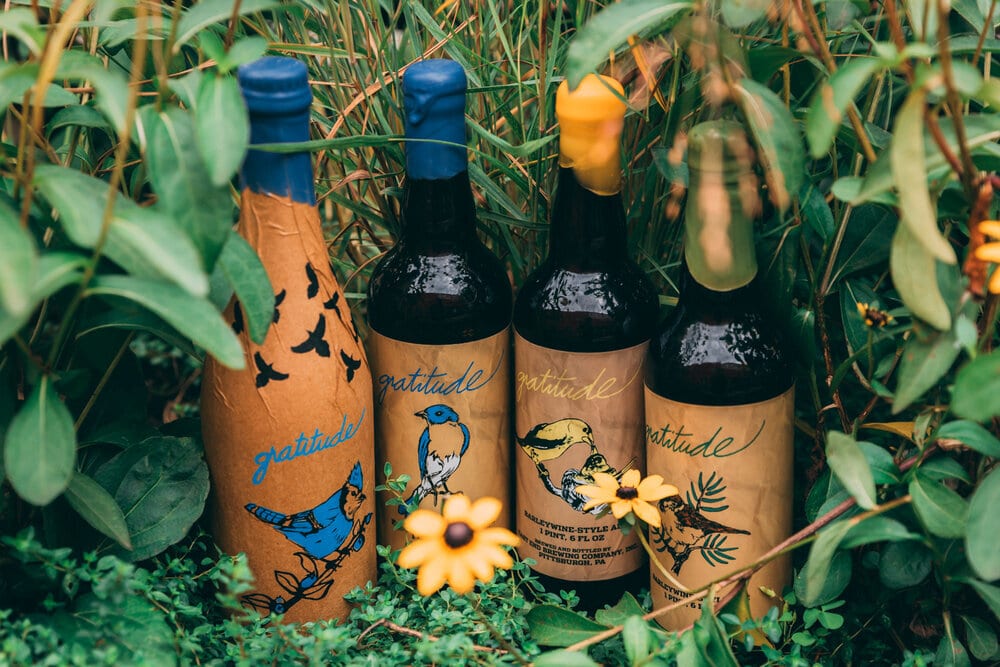 And now for the beer.

Folks familiar with East End Brewing are quick to point out that the brewpub is furnished with 15 beer taps behind the bar.

To honor Allegheny County’s first 15 beer producers, East End is relinquishing all 15 of its taps to the breweries who got it all started. The ultimate, chronological hat-tip.

That’s right – you can head to East End beginning Tuesday, December 10 and enjoy beer from the following breweries:

Note: guests will NOT be able to purchase to-go growler fills of the guest beers. They are for on-site consumption only.

Also, note: brewery #4 on the list is, well…East End. That tap will feature the above mentioned Gratitude Whiskey, aged in a barrel from Maggie’s Farm Rum.

Also, also note: if you’re just craving a nice, familiar East End Brewing beer – all good. Cans and bottles per the usual beer lineup will be available for guests looking to get what they’re used to.

#First15 starts today! We’ve got 15 guest taps from Pittsburgh’s first fifteen operating breweries – including a Gratitude WHISKEY cocktail, all tapped and ready to roll! Thankfully, @larderpgh stashed a bit of #MonkeyBoy for the mussels. …solid planning guys! Please consider this your invitation to join this FAMILY OWNED 😁 brewery tonight for all of this, plus everything else we got in store for our #First15 celebrations running all week long. …check out the link in our bio for the full story. Is it 4 o’clock yet? #happyhour #PittsburghCraftBeer #independent #FamilyOwned #DamnWeAreOld #ChildLabor #DontArrestMe

Parking: On-street parking is limited. Pull up along Julius St. Try to avoid parking in front of the electric transformer station. Avoid using the Sherwin-Williams lot on weekdays too. Pro Tip: if it’s packed, parking along Frankstown Ave is free too.

Food: Order food from the Larder of East End counter, located to the left of the bar inside the brewery.

We’re so excited to welcome our sister business @larderpgh to Pittsburgh. Check it out inside @eastendbrewing for delicious counter-service comforts by chef @justinseverino. Perfect with beer. #larderpgh #saltyporkbits

Getting to East End Brewing

Bike: If the weather is cooperative and you find yourself cycling through town, I highly recommend biking to East End. There’s plenty of bike parking near the front entryway (including a sweet bike lock area) and you’re guaranteed to make friends with others who have pedaled their way to the brewery.

In mid-December, we will mark the 15th anniversary of the first time we ever poured an East End beer. That’s kind of crazy to me (Scott) personally, as it means I’ve been at this for more than half of my working life. #2ndcareer But I‘m pretty sure this calls for some kind of significant celebration! The whole thing is still coming into alignment, but we’ve already got some awesome things planned. This may be a little premature, but please save the date of THURSDAY DECEMBER 12TH, and we’ll fill you in on all the details as they take shape! #PeddlingBigHopsince2004