Our self-guided walking tour of downtown can (safely) get you outside and amongst several Pittsburgh landmarks while enjoying a breath of fresh air.

Please observe guidance from the local government and CDC when going out for a walk.

Update May 25, 2020: The Downtown Farmers Market had reopened for the summer. The market has moved from Market Square to 11th Street and is open on Sundays from 9 am to 1 pm.

The Market Square Farmers Market is returning this Sunday with a temporary new day, time, and location!📅: Sundays…

Posted by Pittsburgh Downtown Partnership on Wednesday, May 13, 2020

Outside, so far, is not. While people are being urged not to congregate, and to keep a safe distance away from each other, getting some exercise and breathing fresh air under the sun (when it shows up; this remains Pittsburgh) is still on the table. We can take a walk.

Fortunately, wherever you go there’s something to look at, something historical, beautiful, kooky, or all of the above. Within the workings of the city there are details we may not often notice as we rush from one place to the next, focused on our next task, traveling from one destination to another, mindless of what we’re passing as we pass it.

Now we may have a chance to take the time to see it. 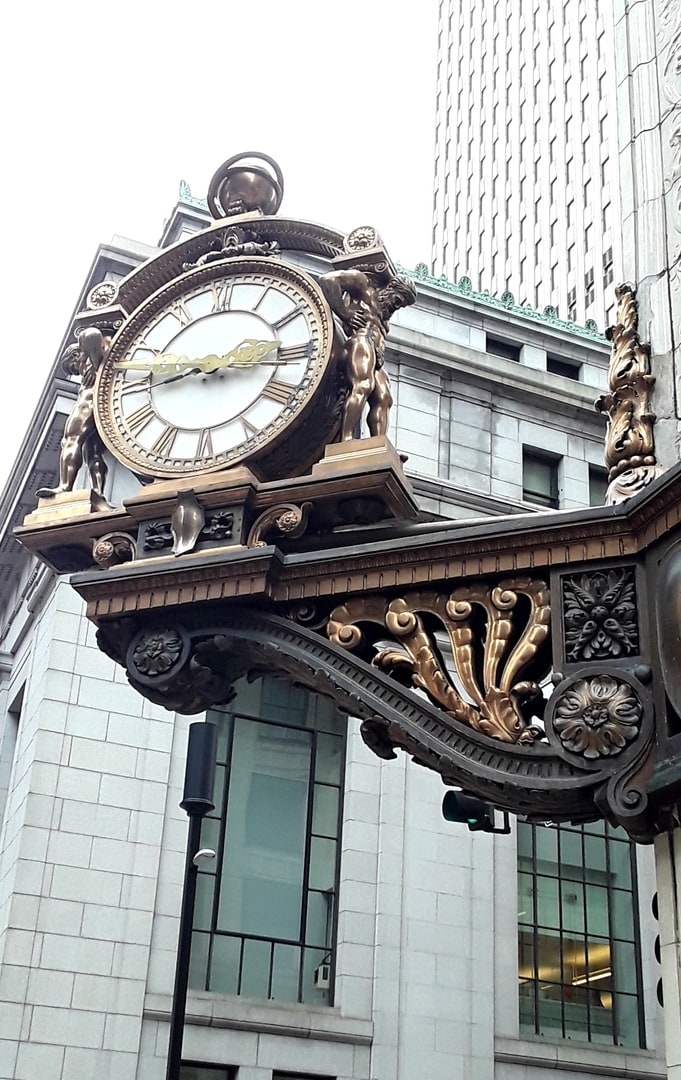 Once upon a time in bygone days, people had to move around the world without the aid of portable personal devices. Plans were set on telephones tethered in the home, corded contraptions that stayed in place even when their users didn’t. This meant you had to decide where you were meeting your friends, even if you didn’t know what you’d be doing once met, before you left the house. And in Pittsburgh, the easiest place to do this was underneath the Kaufmann’s clock.

Kaufmann’s was a premiere department store where you bought candy, hats and party frocks, partook in a family lunch or elegant repast, sat in Santa’s lap after gazing enraptured at the holiday window displays you waited for all year. Installed by the Coldwell Clock Company in 1913, the clock is a 2500 pound bronze chronograph, a clock face flanked by two muscle-bound men a fig leaf away from public indecency, standing like Atlas to prop up this massive timepiece bordered with flowers and flourishes and topped with a globe. A cleaning in 1987 scrubbed decades of soot and industry away, and it gleams bright and burnished.

“Meet me under the Kaufmann’s clock” is vanishing from the vernacular, but the clock itself still ticks, once the heartbeat of the city, now a murmur we strain to hear. 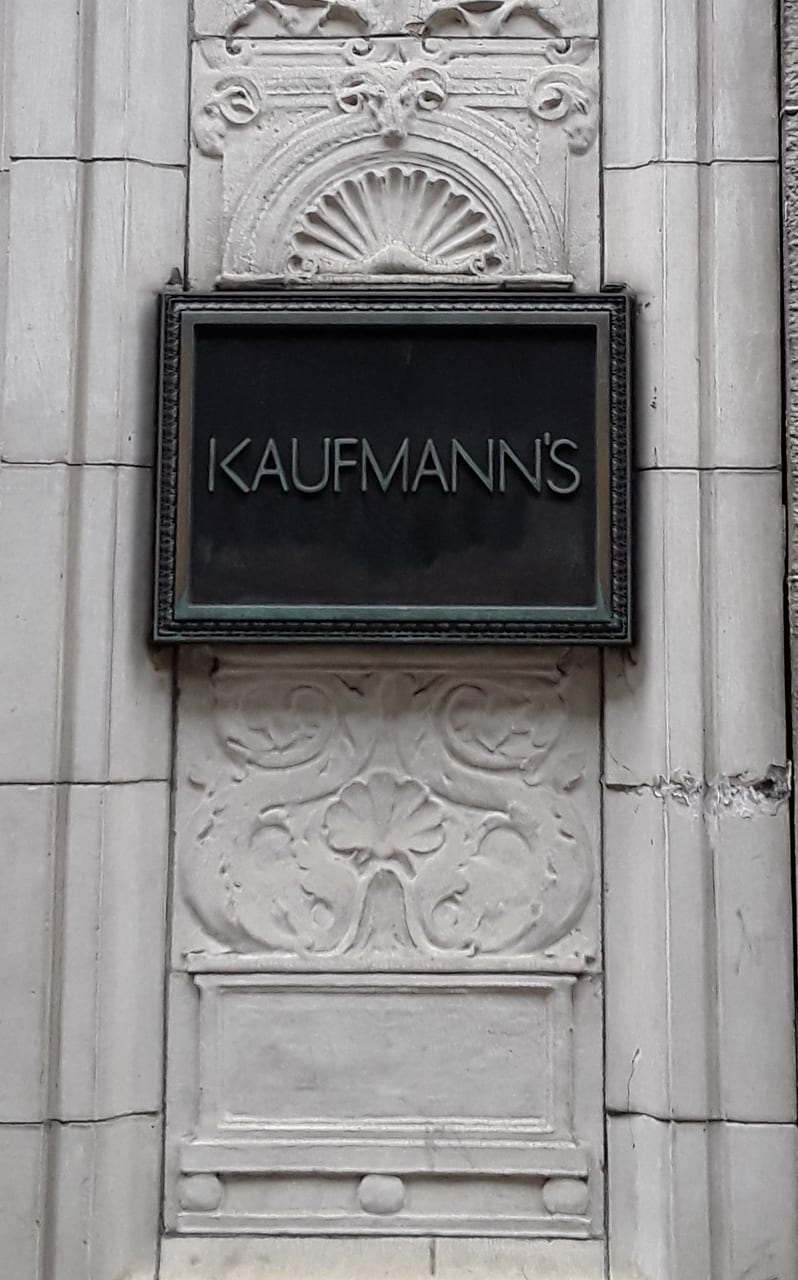 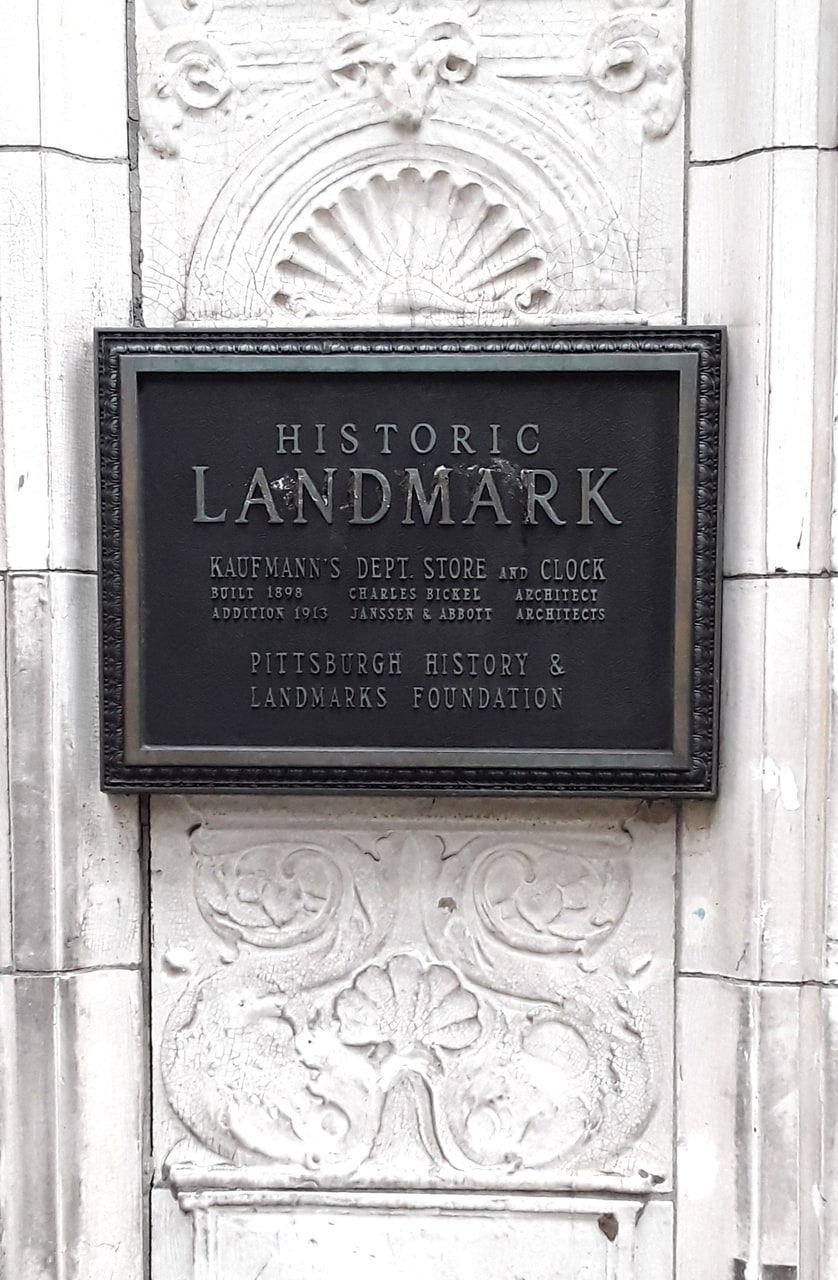 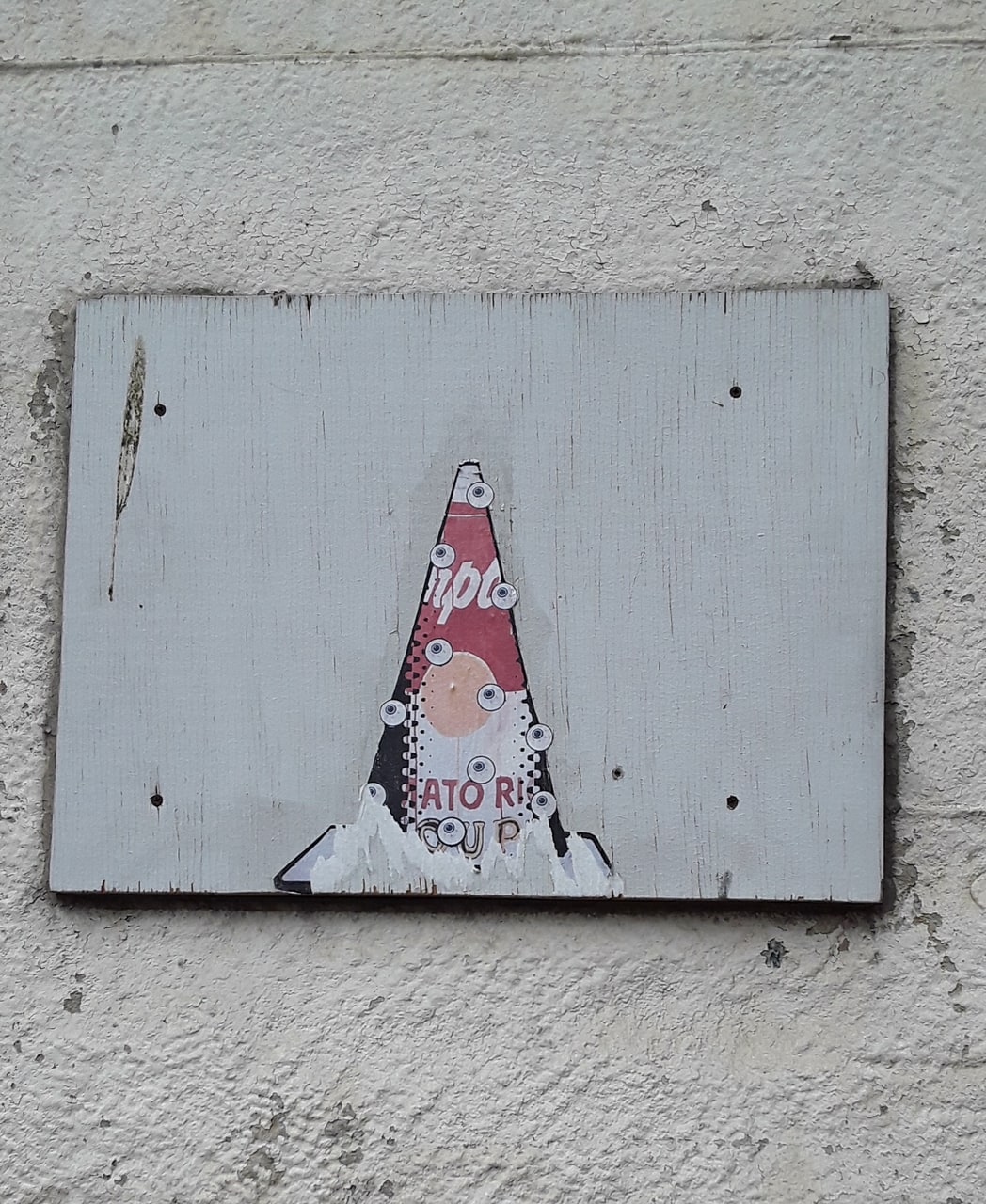 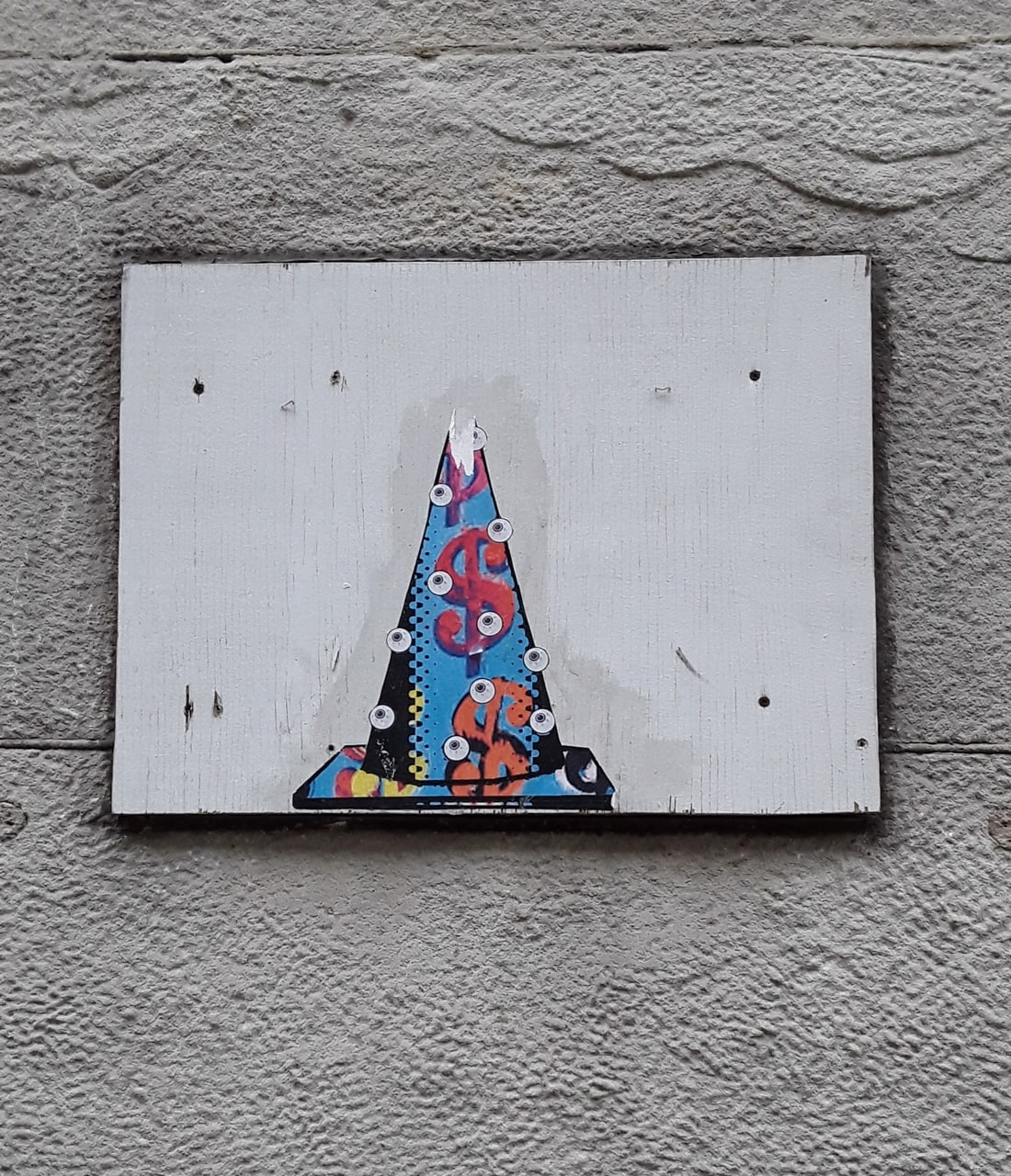 The clock isn’t the only component of interest on this building. It’s one of many historic structures flaunting a wealth of intricate details. In addition to the original curiosities, guerilla art shows up on its facade. 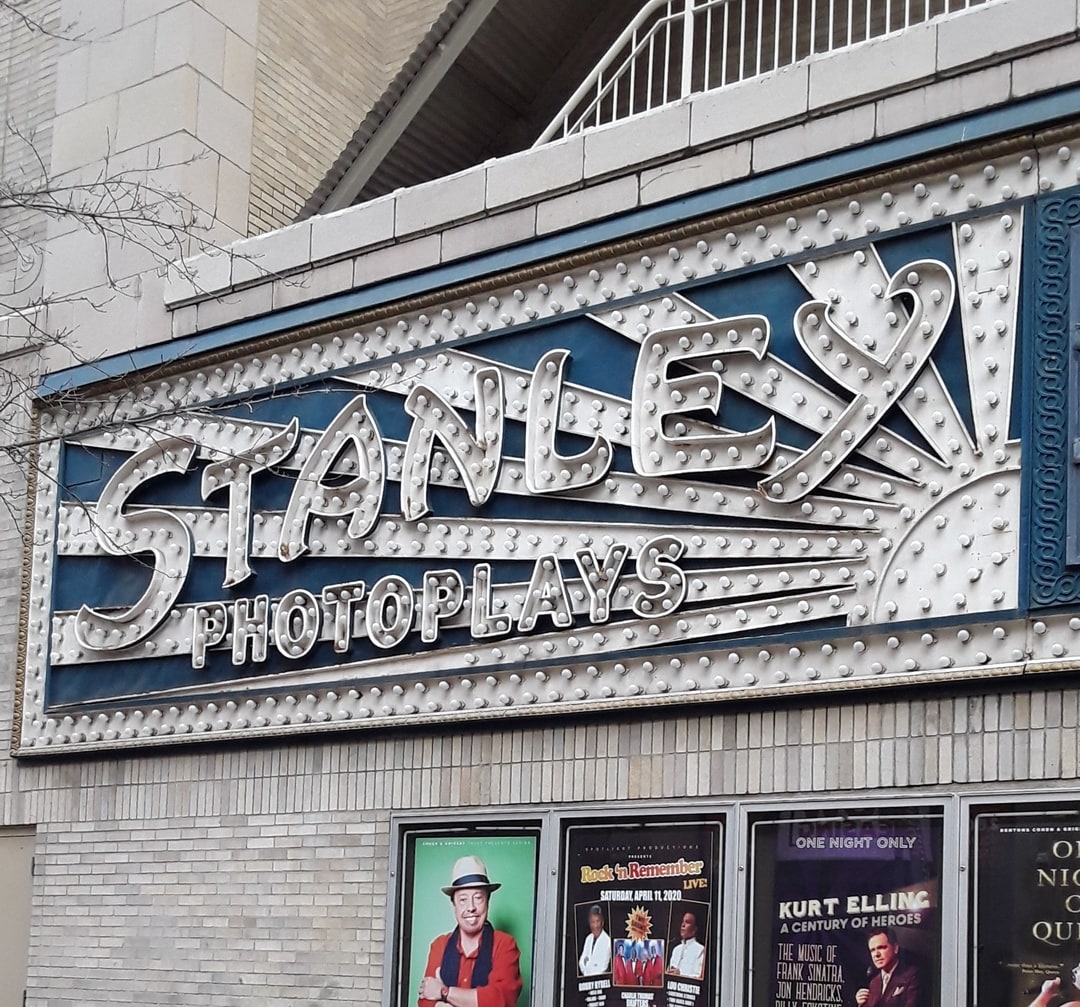 The Benedum Center hosts a variety of touring performers from Broadway shows to opera to concerts to dance, the current act emblazoned on the marquee on 7th Street. But around the corner is a reminder of what it used to be, the Stanley Theater.

The Stanley opened in 1928 as a house of entertainment offering live performances as well as the then novel, as well as silent, new diversion of movies. It operated until the mid 40s, and was resurrected under new ownership in 1969. Cab Calloway trod the stage first, David GIlmour took the ultimate bow, and in between were Judy Garland, Xavier Cugat, Bennie Goodman, Ella Fitzgerald, the Grateful Dead, David Bowie, Queen, Springsteen, Devo, Rush, Van Halen, Blondie, Liza Minelli, Englebert Humperdinck, Adam Ant, Elvis Costello, the Clash, and Bob Marley in his last show ever.

1984 was the end of the theater’s second era; when its third began in its restoration it was renamed by the Pittsburgh Cultural Trust. But the Stanley lives on, both in the memories of concertgoers who thrilled to Prince, the Beach Boys, Bette Midler, and Smokey Robinson, and in the sign that pays tribute to the past above announcements of the future. 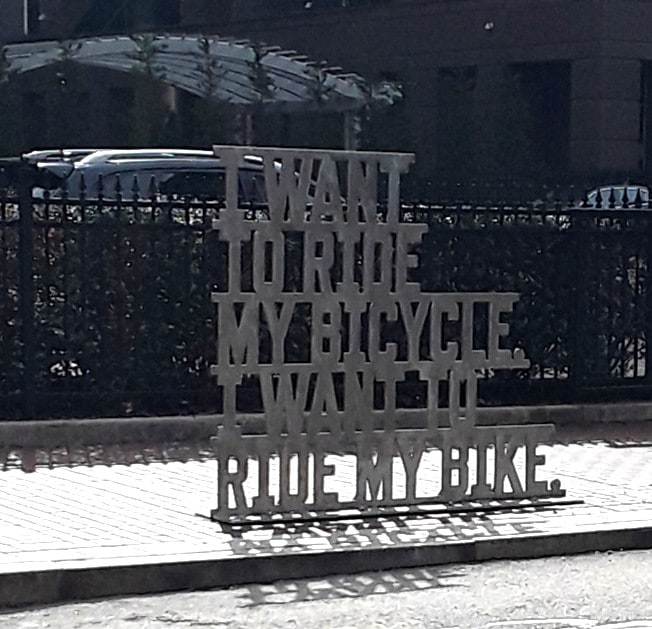 It’s a given that bike racks are practical; they serve a definite and undeniable purpose and are of merit based on nothing more than their usefulness alone. But within downtown Pittsburgh they go beyond function to embrace form, balancing mechanics with aesthetics. Over two dozen bike racks within downtown are installation artist designed works, allowing you to anchor to clouds and thunderbolts, airplanes aloft, bridges, timepieces, squirrels, and song lyrics that express the pure unassailable joy of slotting your feet into the pedals and moving. There’s over two dozen, including Brett Yasko’s tribute, pictured, to the Queen song that is likely the most popular tune sung by anyone getting ready to hit the trails. 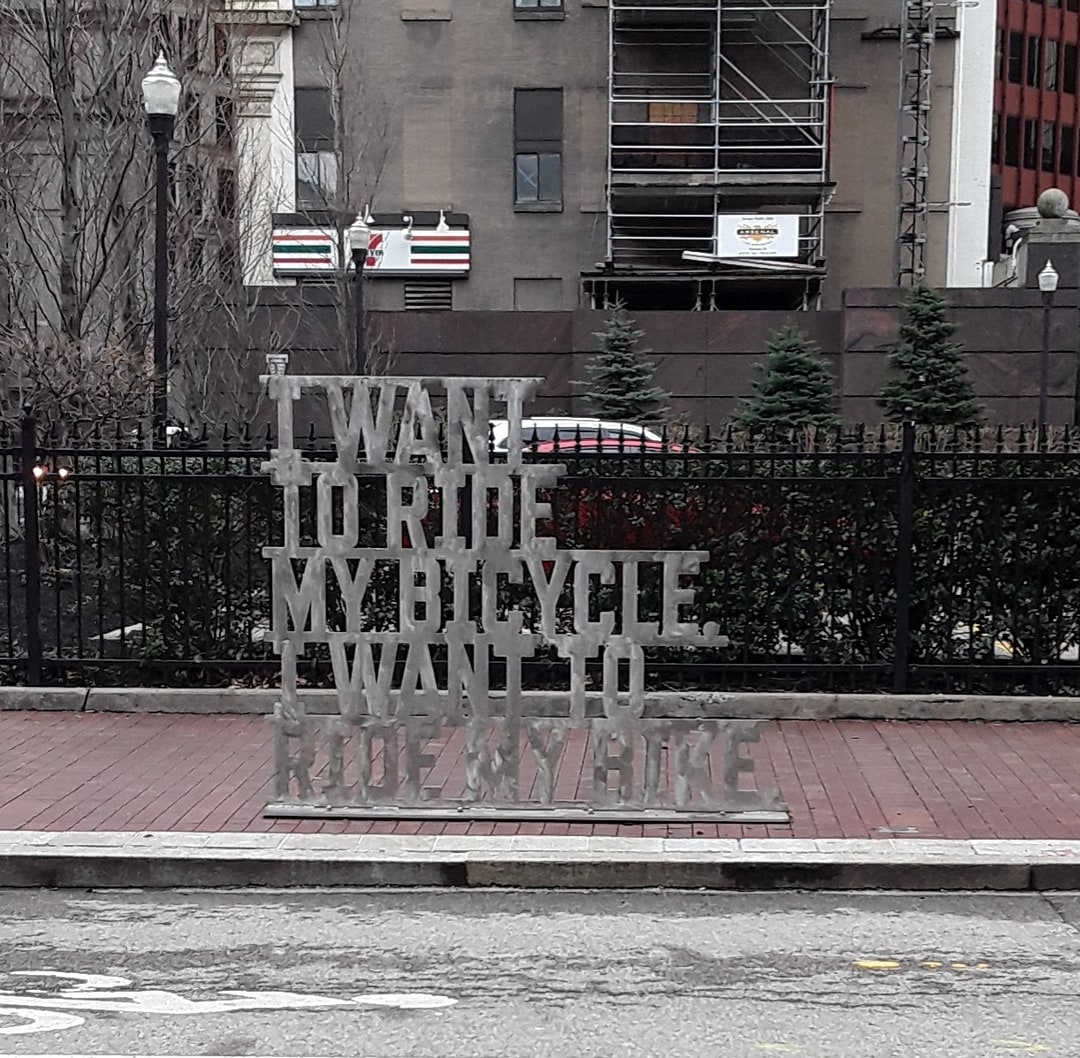 A full map of all the Cultural District Art Bike Racks is available here. 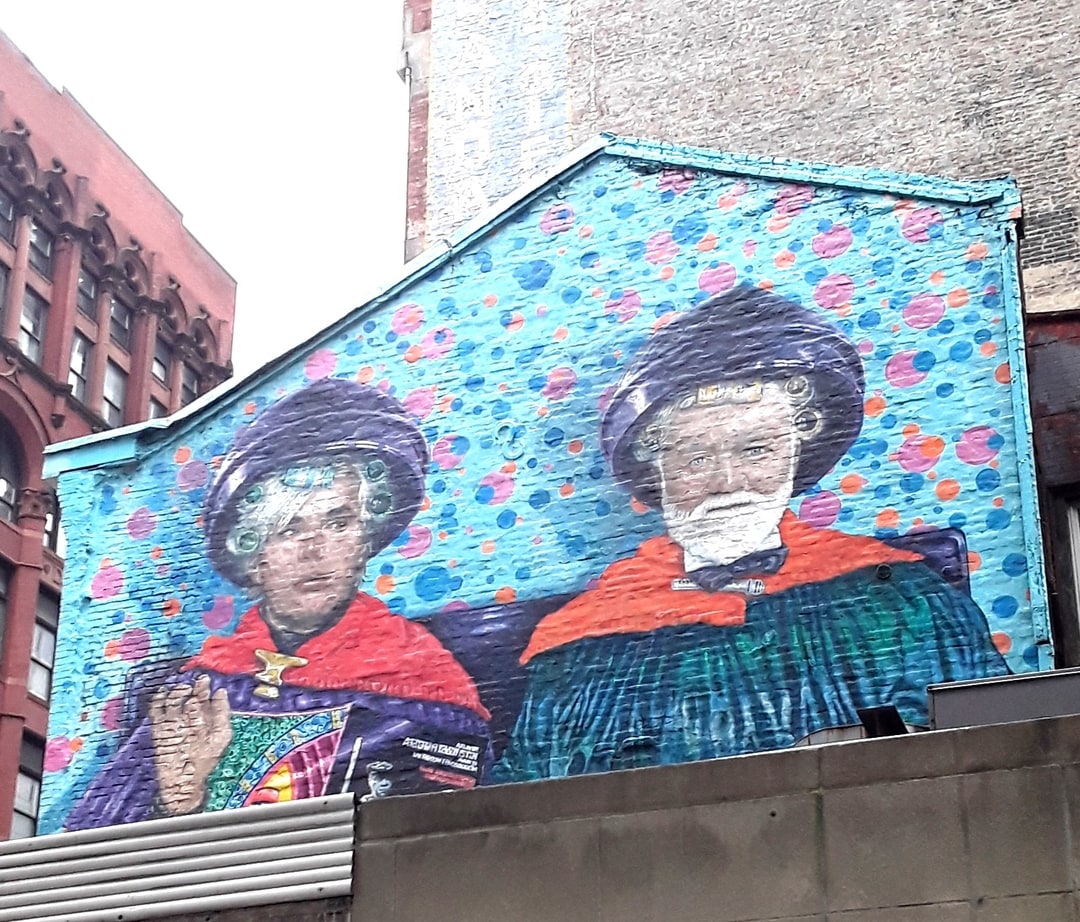 Art abounds downtown, with a line-up of galleries hosting an ever-evolving rotation of works by local, regional, national, and international artists. It also lives outside. Murals catch you as you’re walking by and make you stop and stare- Richard Haas’ s trompe l’oeil work on the Fort Duquesne wall of the Byham Theater breaks through the brick to envision a theatrical performance with a steel mill set; “The Two Andys”, by Tom Mosser and Sarah Zeffiro, seats Warhol next to Carnegie in beauty salon chairs, and the only thing that could make it better would be if it were above a hot dog joint called Wiener World with an endearing old sign in the window, which it is; Brian Holderman’s “Yesterday’s Tomorrow” is a zippy, kicky, Jetsonsesque retro riot of color and movement. 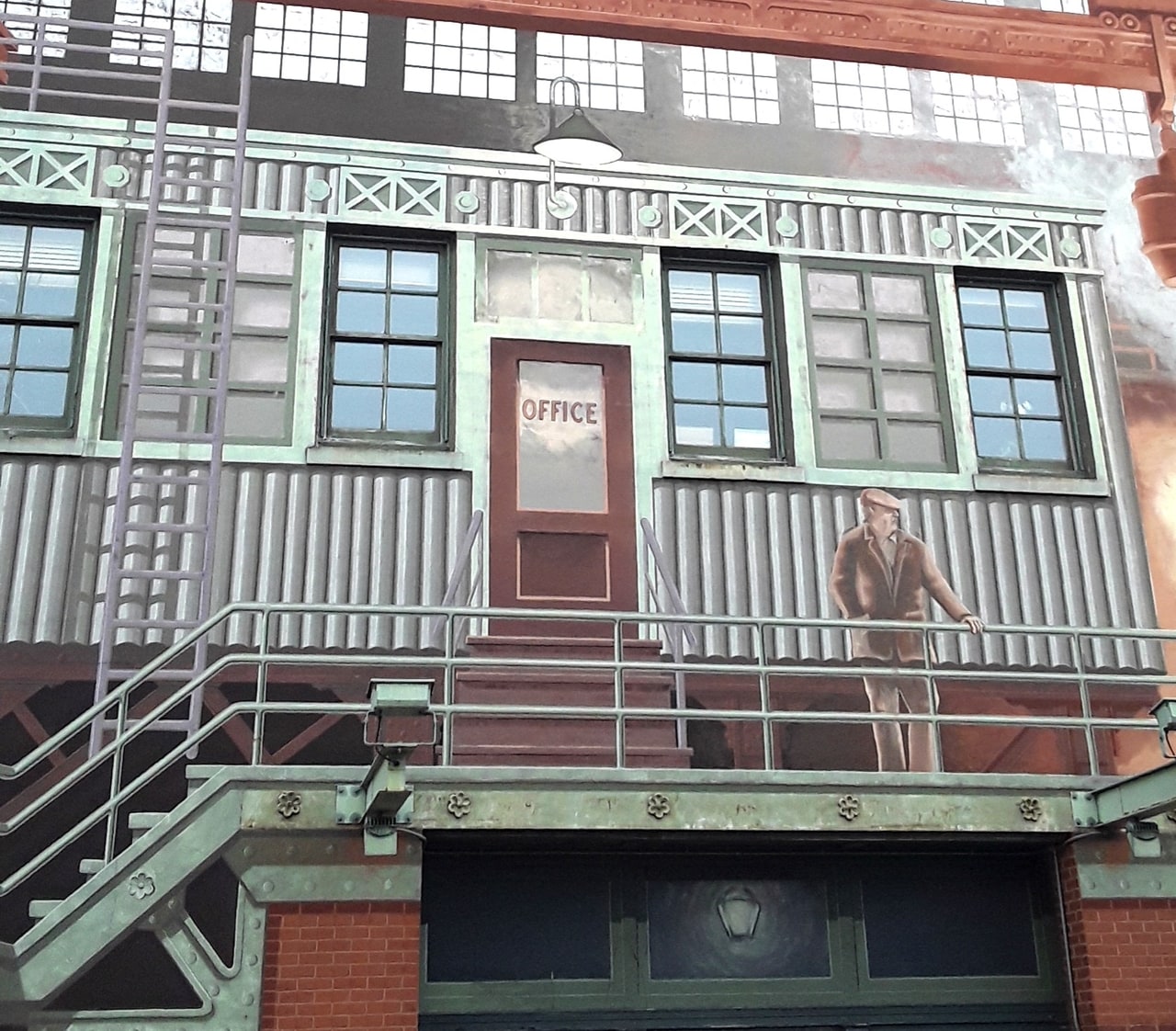 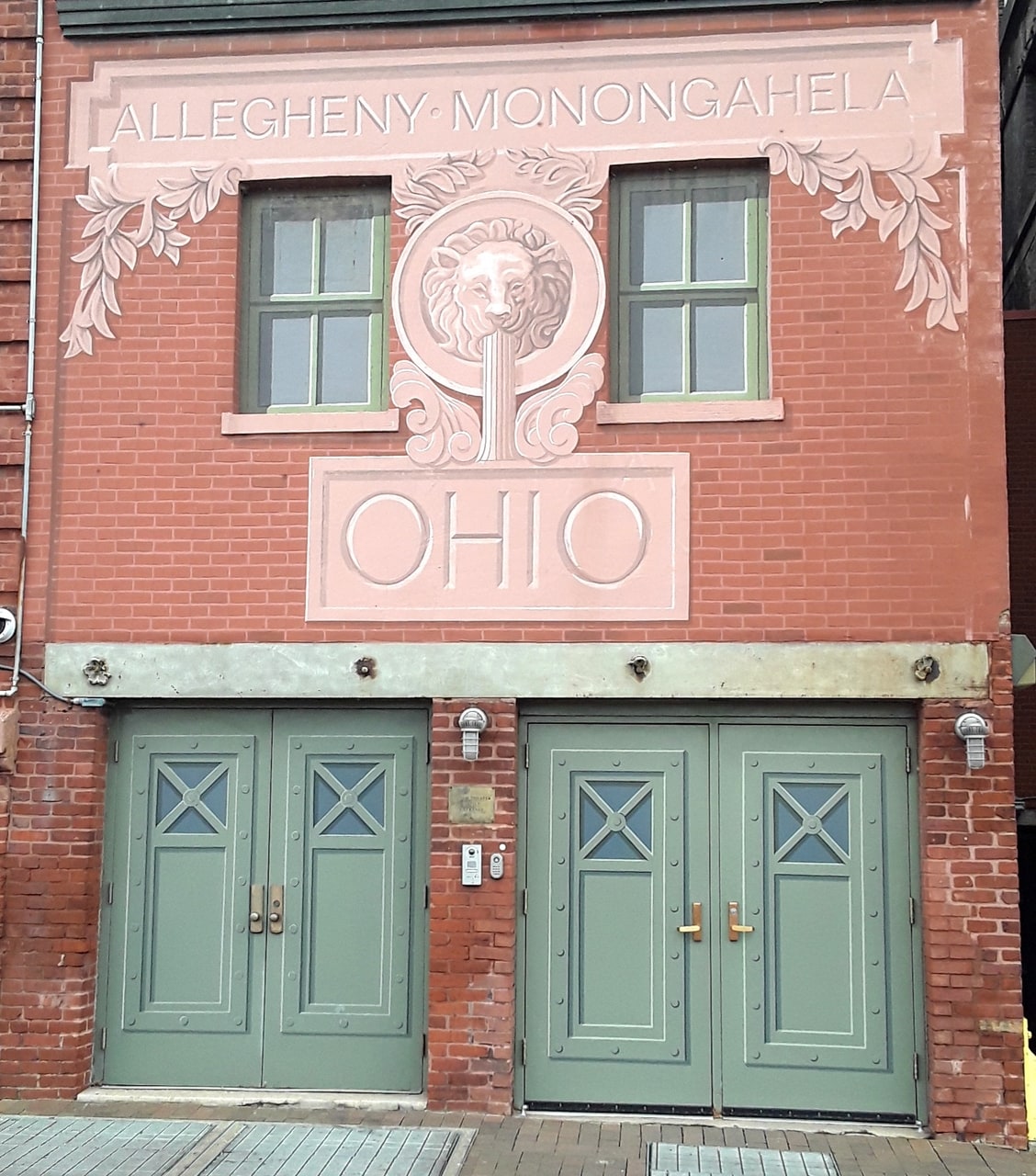 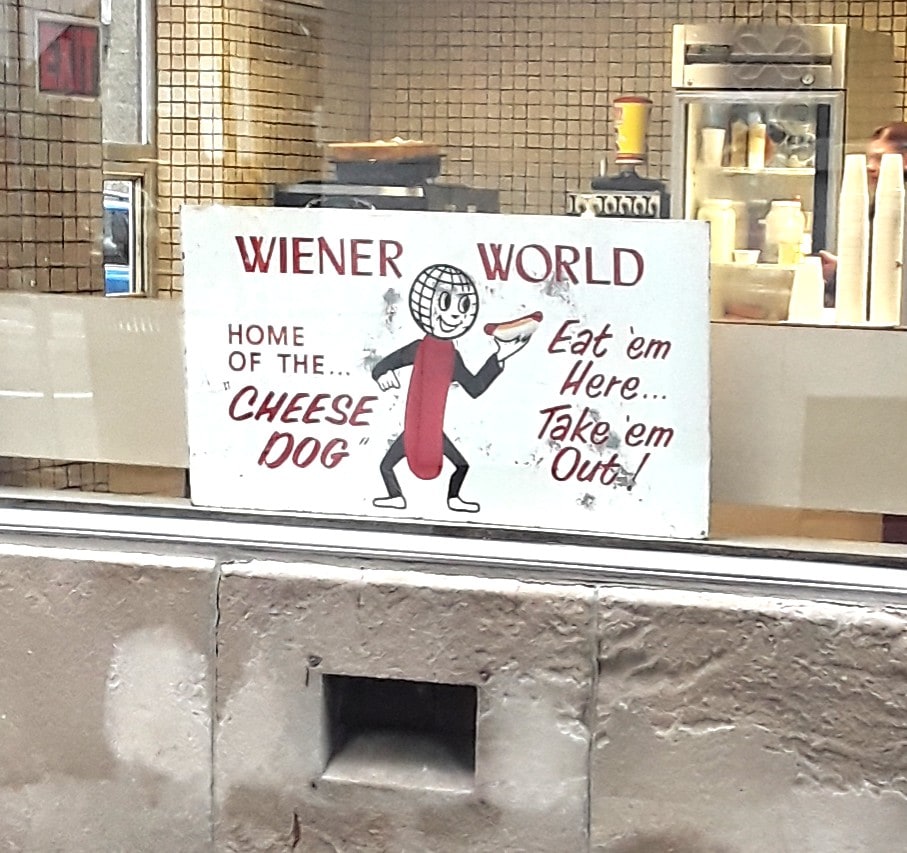 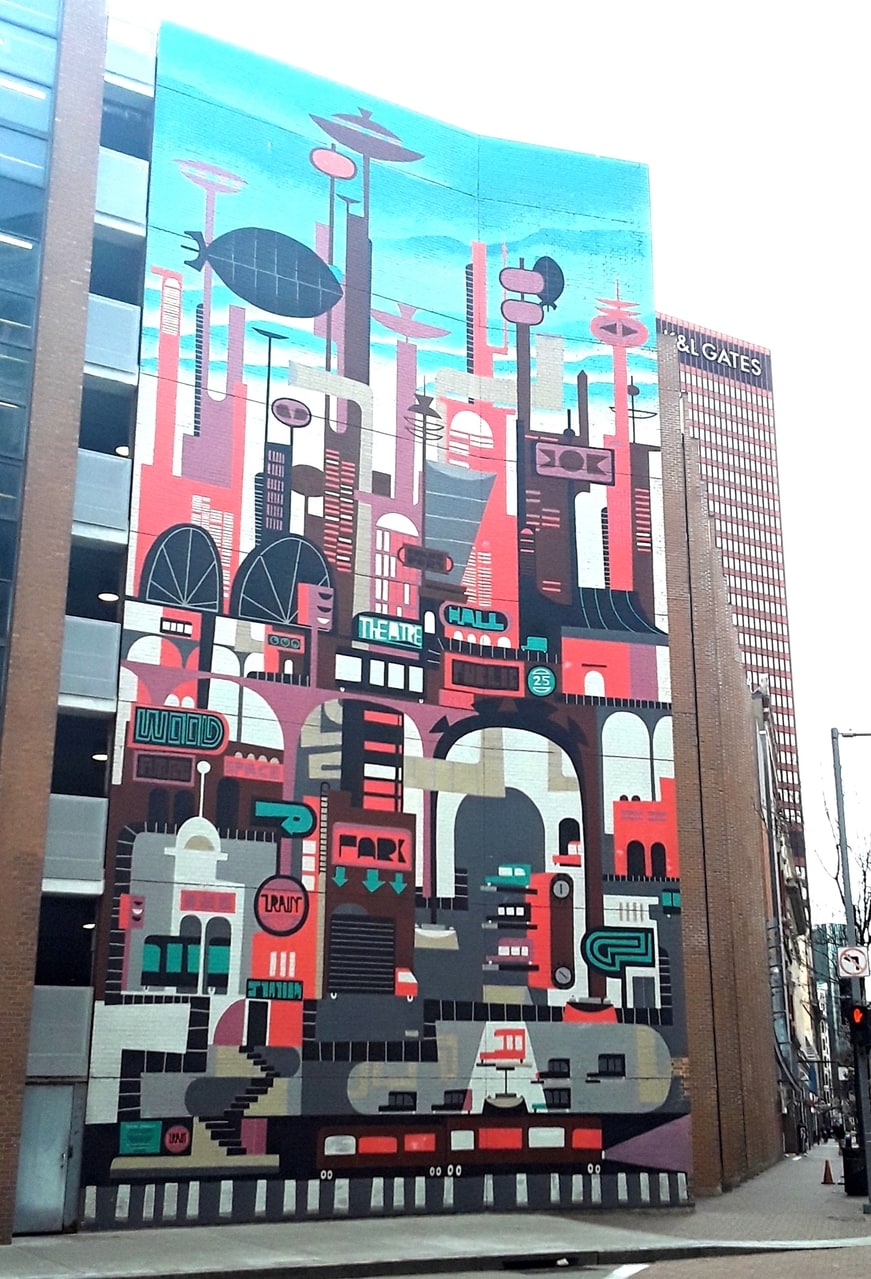 Sixth Street over the Allegheny River 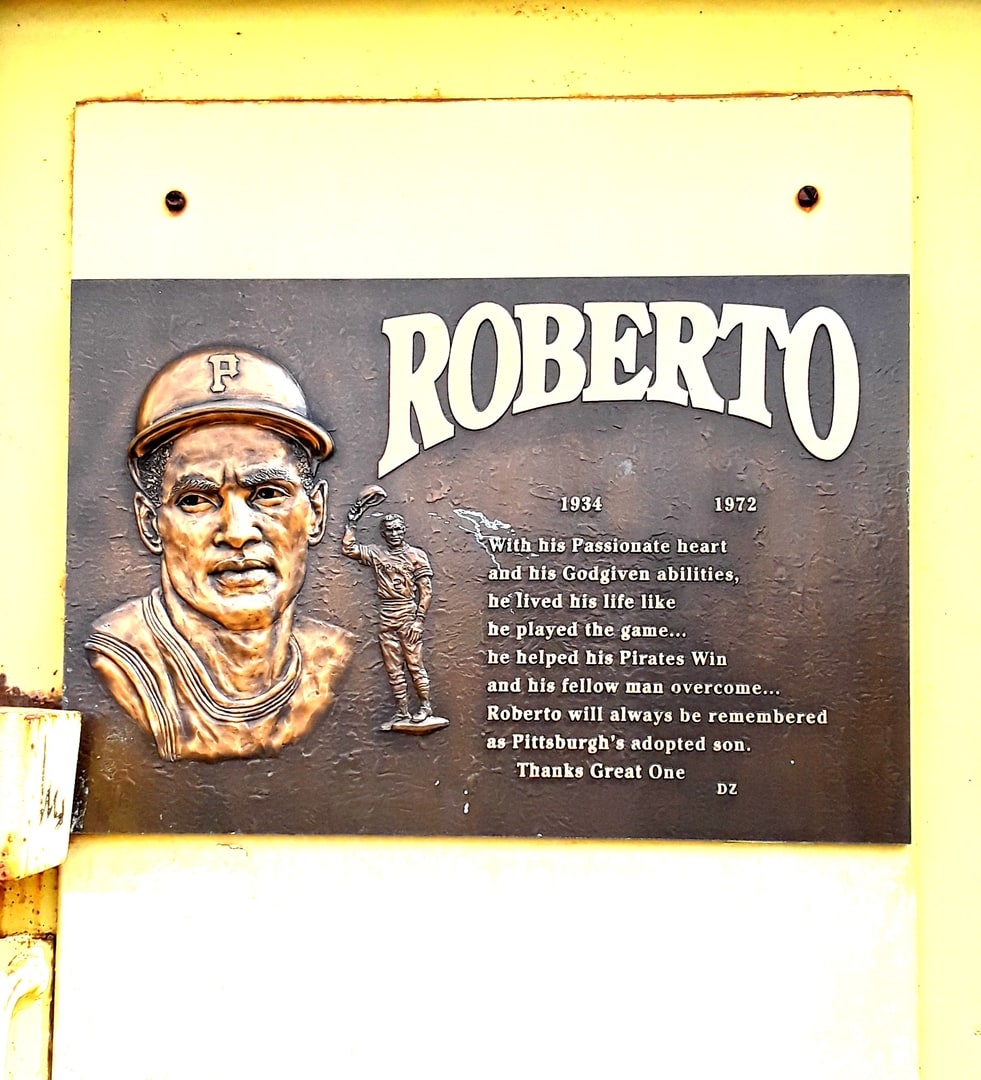 It was the thought of many before professional baseball was postponed that this would be the year the Buccos finally returned to the World Series, and left it as champions!

This is a lie.

It was likely at least that steadfast fans would flock to the most spectacular ballpark in the MLB, staunch supporters of their hometown colors no matte what the team’s ranking!

This is also a lie.

Regardless of the state of the Pittsburgh Pirates, Roberto Clemente will always be remembered as an athlete and humanitarian we can feel honored to have had with us for the brief time he was here.

This is the absolute truth.

Beginning in 1819, four bridges spanned this stretch across the Allegheny River. This one debuted in 1928 as the Sixth Street Bridge, it was renamed in 1998 after the naming rights to the ballpark went to PNC Financial Services. It pays homage to a man who we love for so much beyond baseball, and who we love for baseball too.

“With his Passionate heart and his God-given abilities, he lived his life like he played the game… he helped his Pirates Win and his fellow man overcome… Roberto will always be remembered as Pittsburgh’s adopted son. Thanks Great One.” The plaque is on the downtown end of the bridge, on your right if you are facing across to PNC Park. 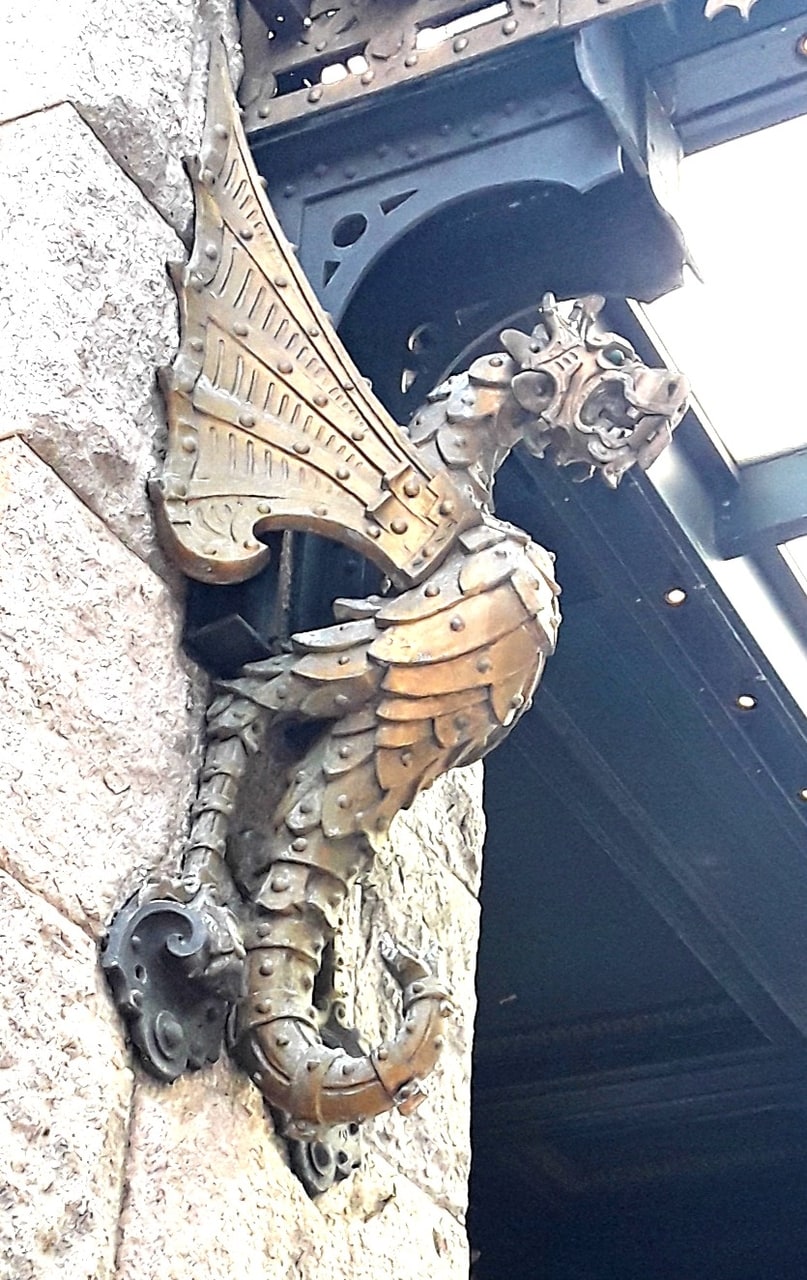 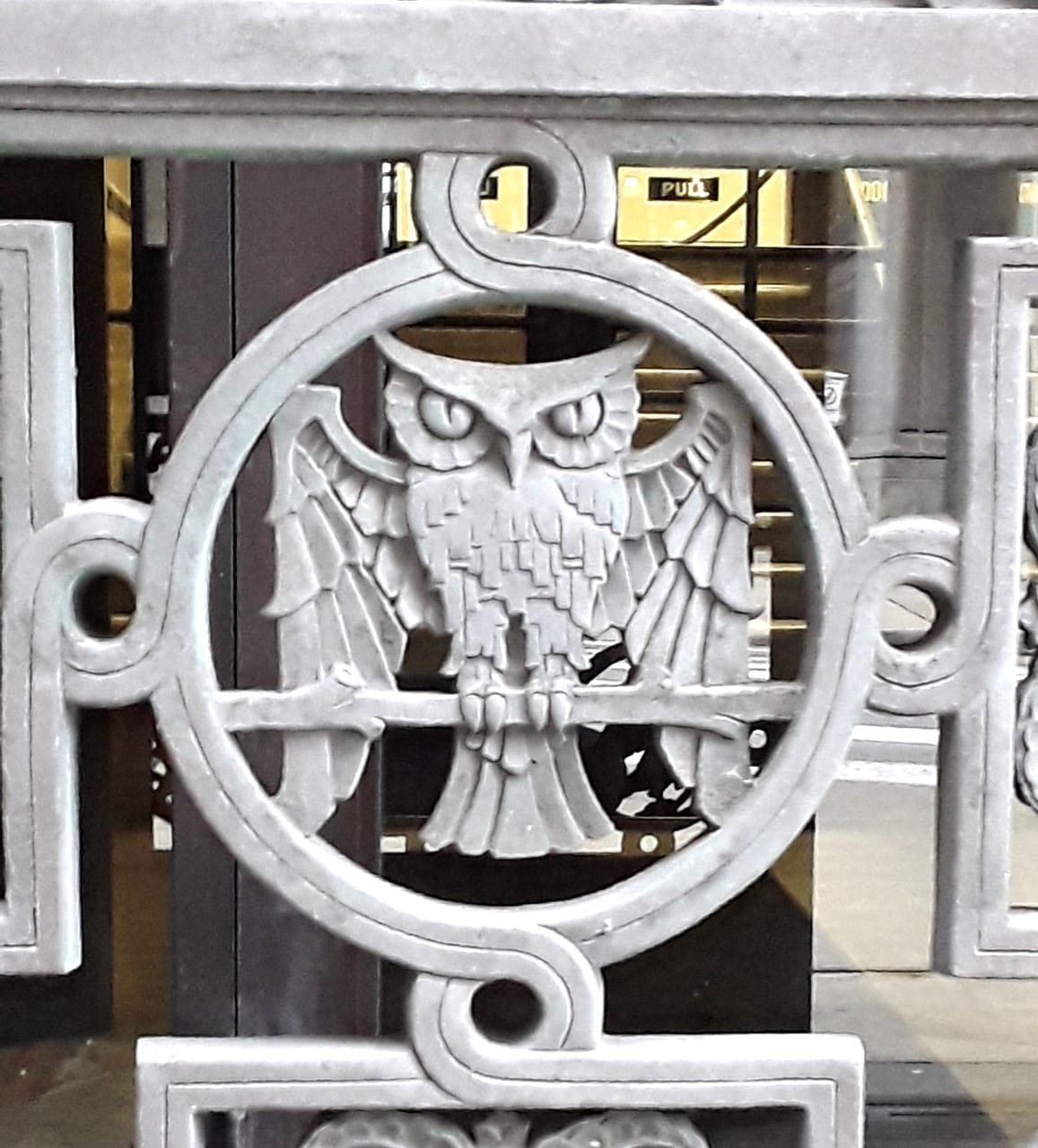 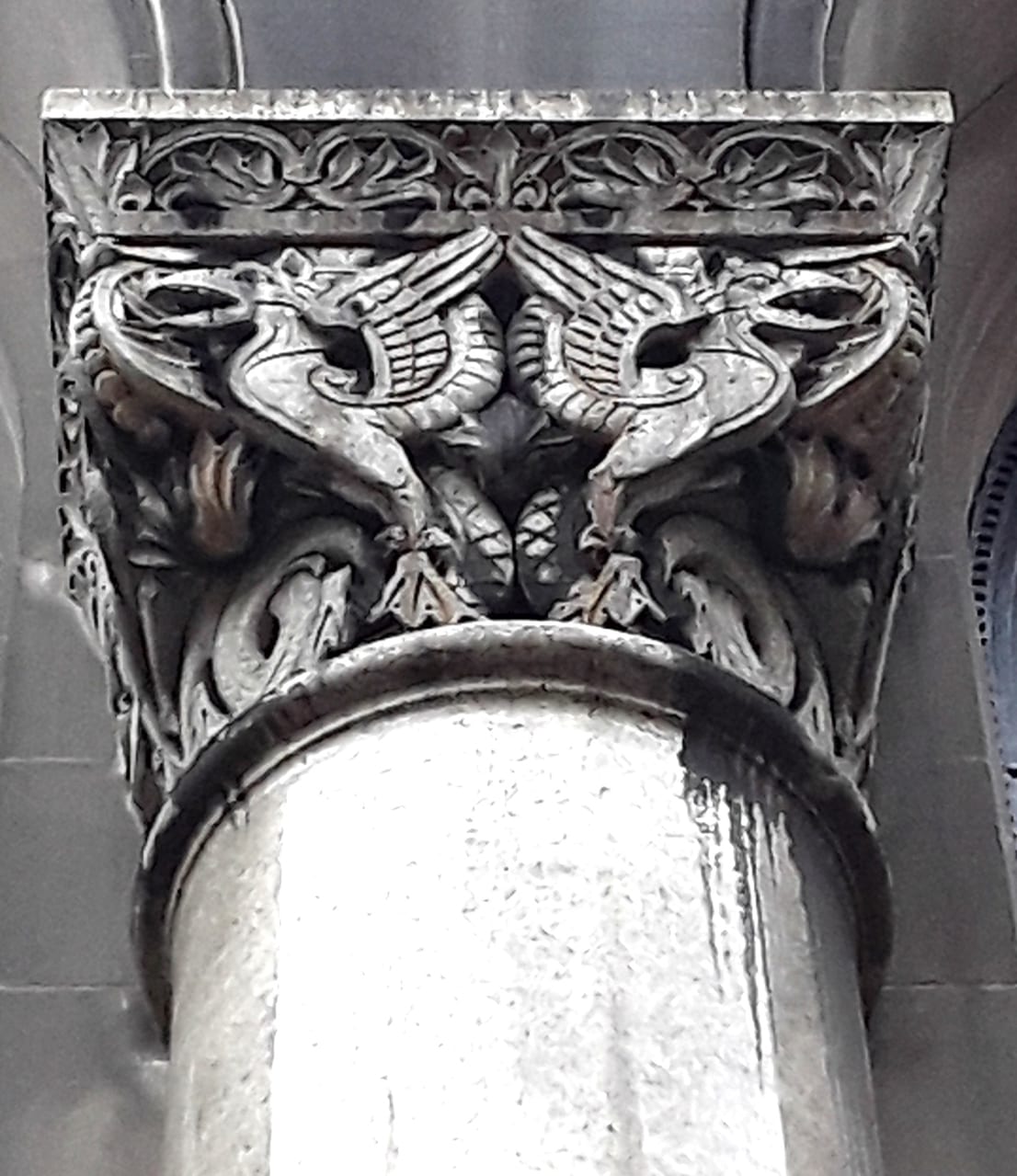 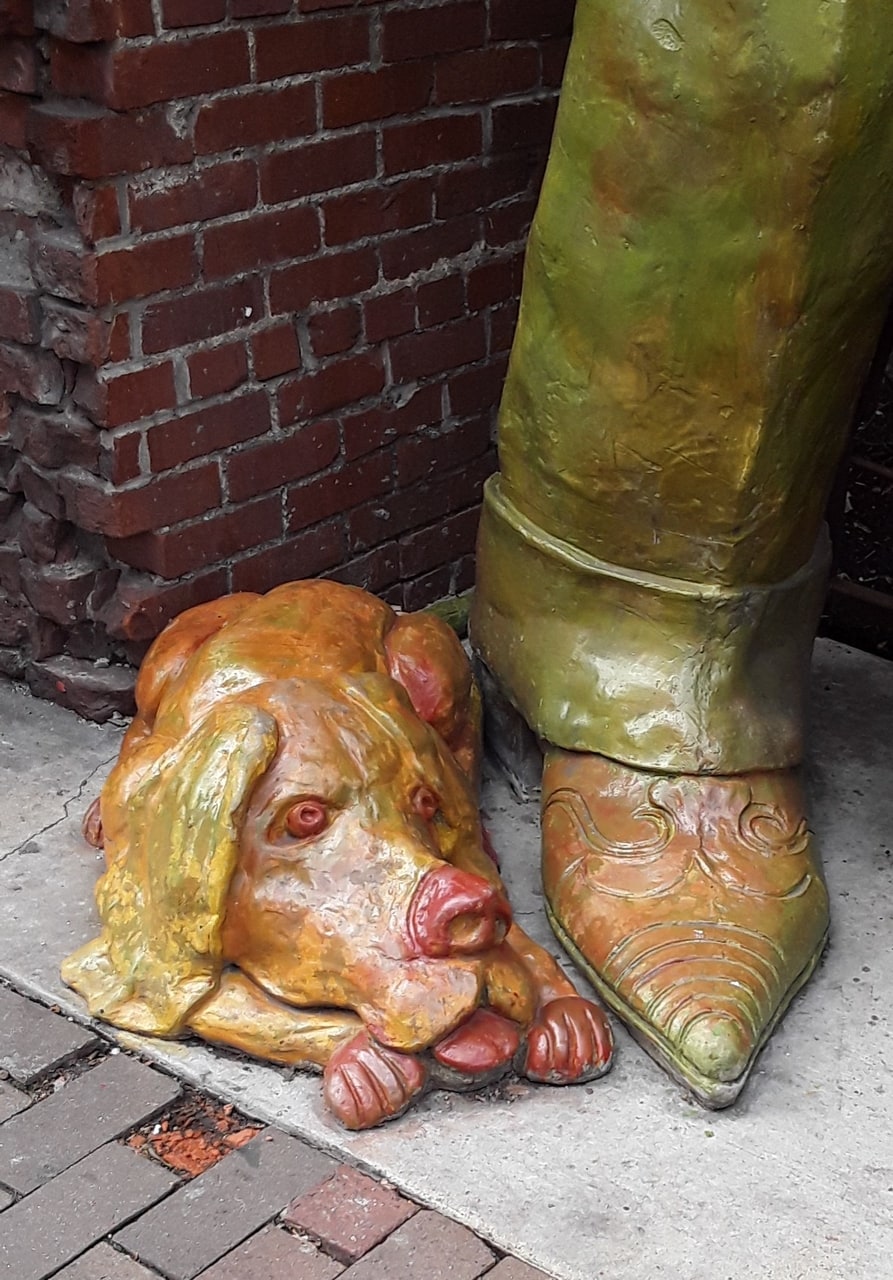 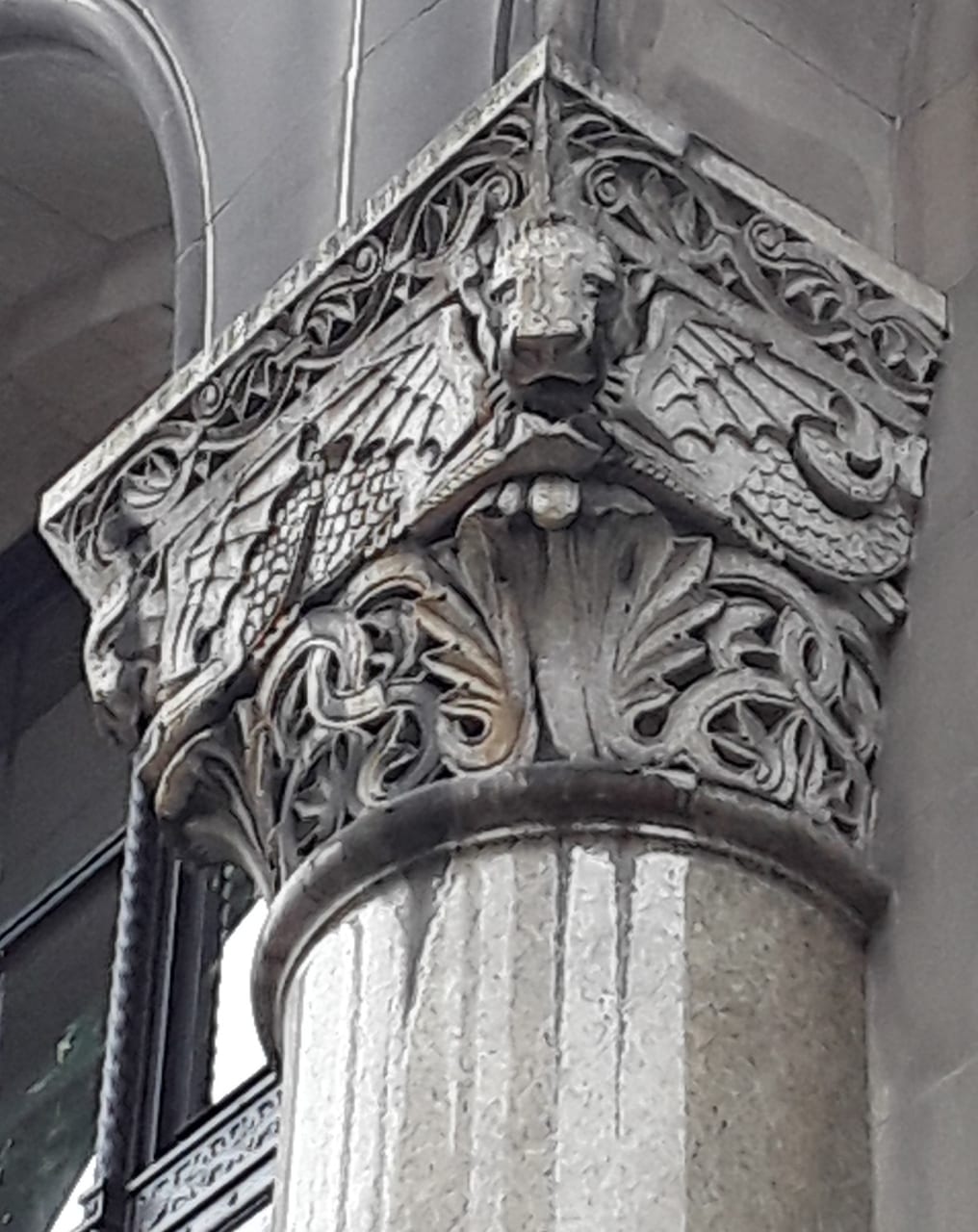 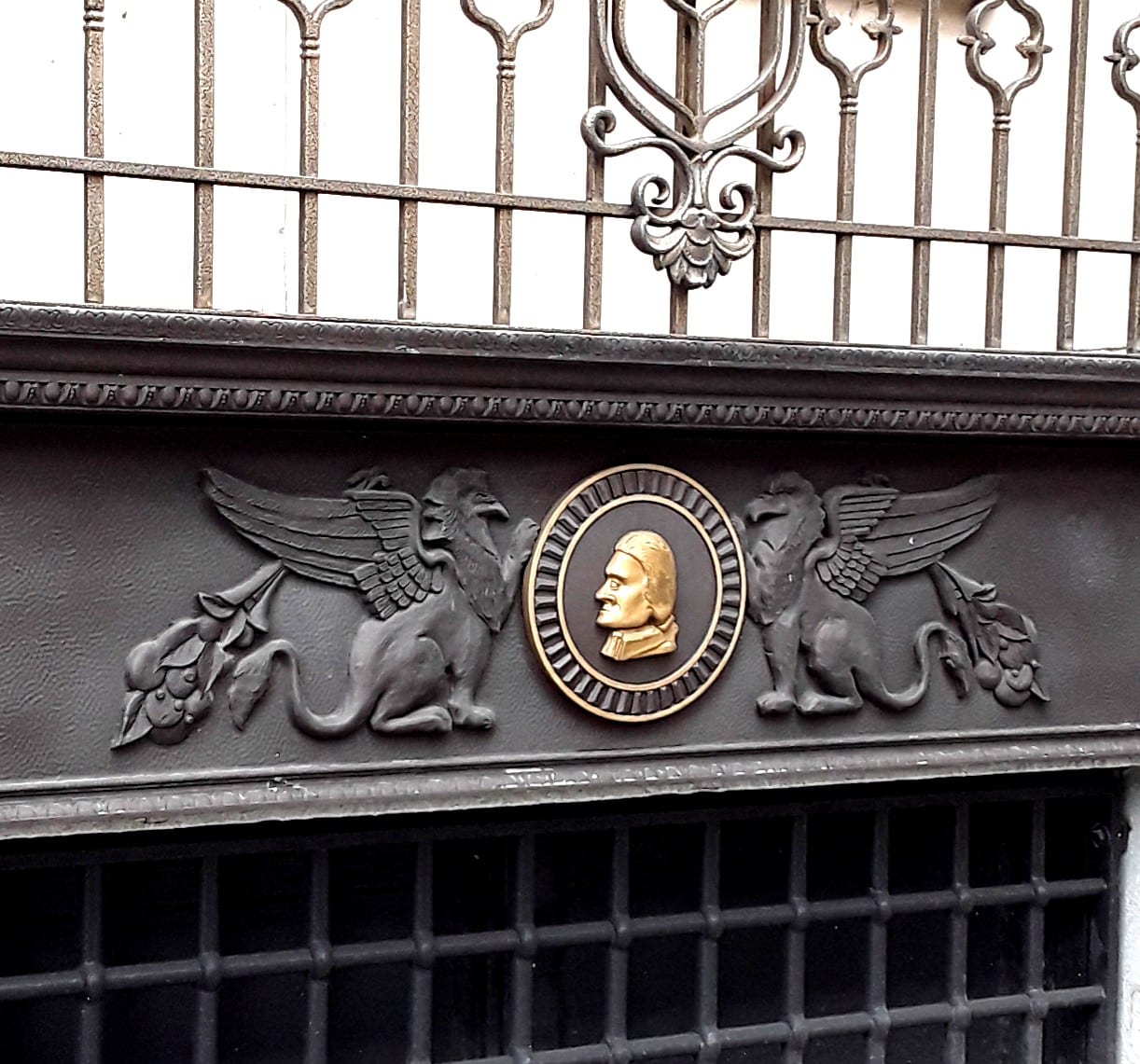 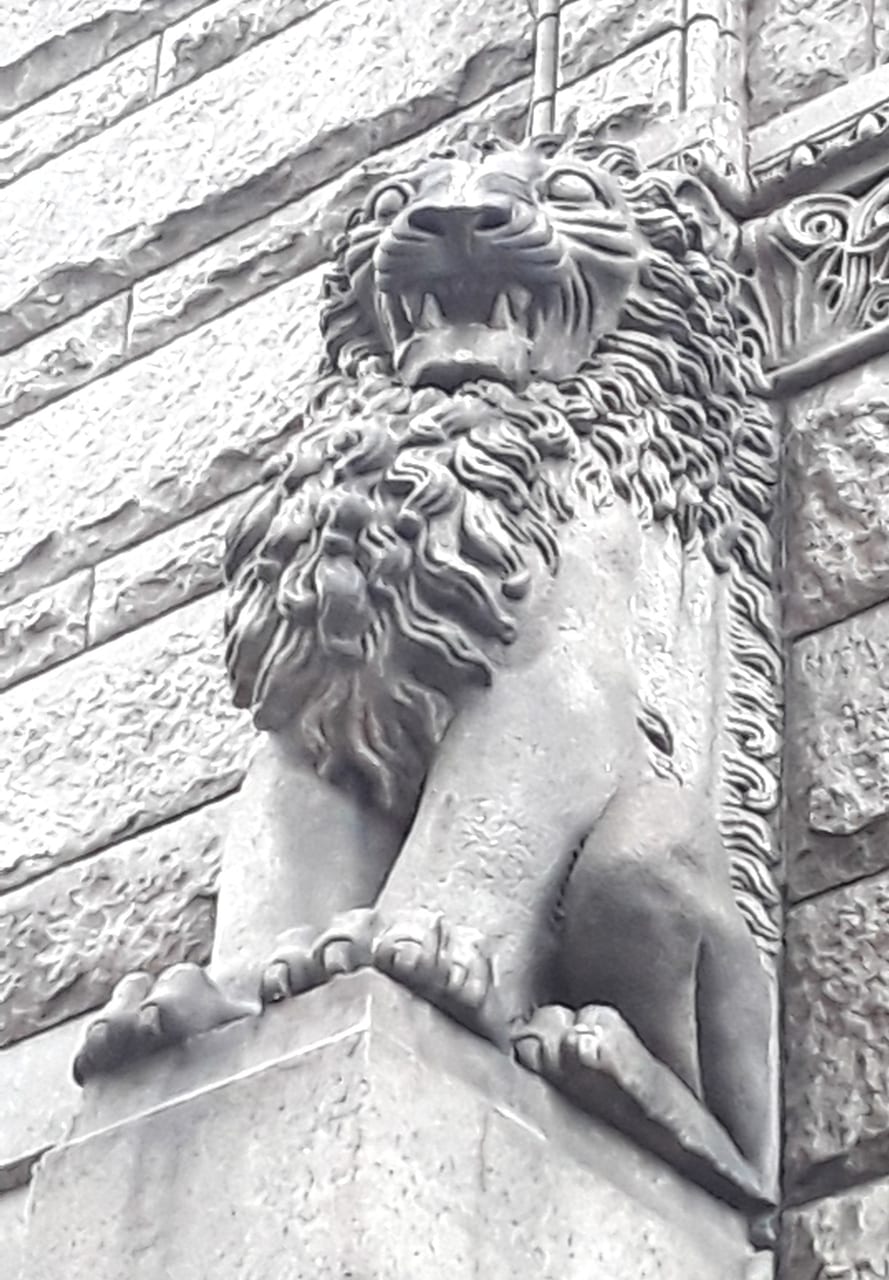 There is a zoo in Highland Park. There is a zoo, of sorts, downtown as well. Within the architectural marvels and delights festooning hotels, theaters, apartment buildings, government offices, a menagerie can be found. There’s a jungle hidden within the stonework, full of birds and beasts. If you start looking for them, you’ll be amazed at how many you can find. 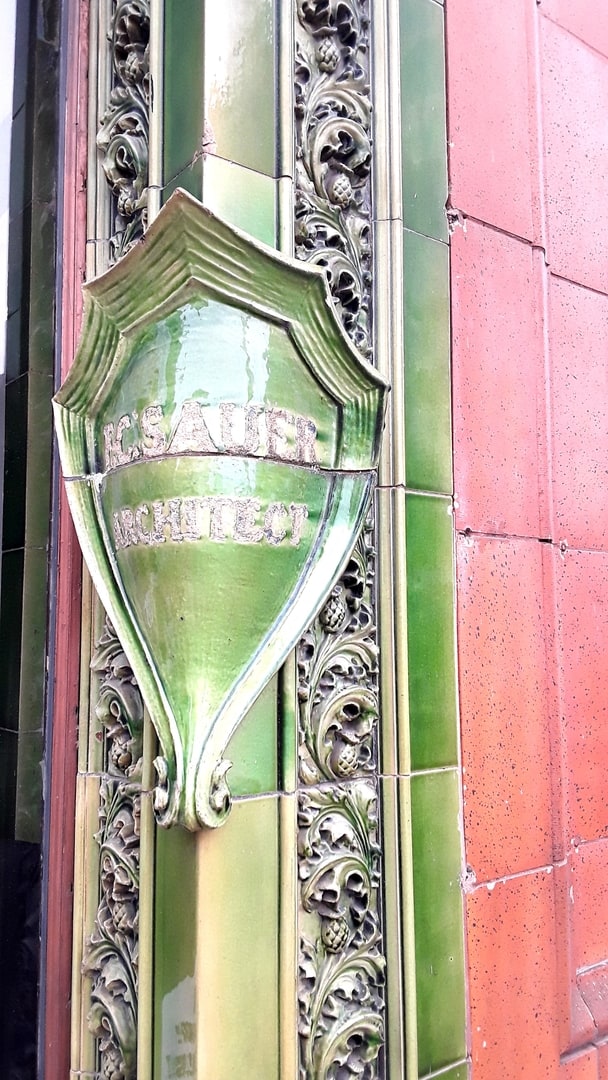 While the architecture of downtown Pittsburgh is a wonderland in its features and particulars, in its hues it tends to turn things down a notch. That which enchants and enthralls does so in part through unearthing it, searching for covert distinctions within the drabness that often are not readily apparent; which make their presence known once we have looked for them but which fail to reach out and grab our attention if we don’t give it of our own accord. 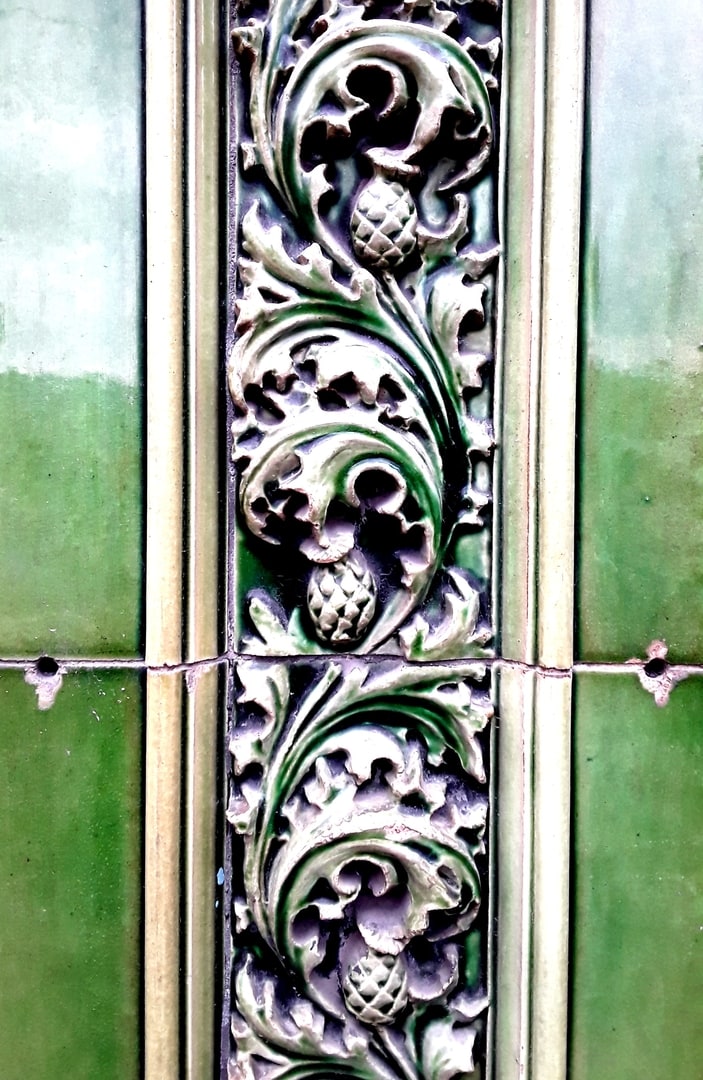 The Green Building is an exception. While many newer and renovated edifices boast of being green from an environmental perspective, this one is green of the rainbow, lush, verdant with emerald tiles bedecked with leaves and thistles. Once an architect’s office, now a printing shop, It’s gorgeous and arresting and a burst of saturated color that breaks through the most dreary of days. 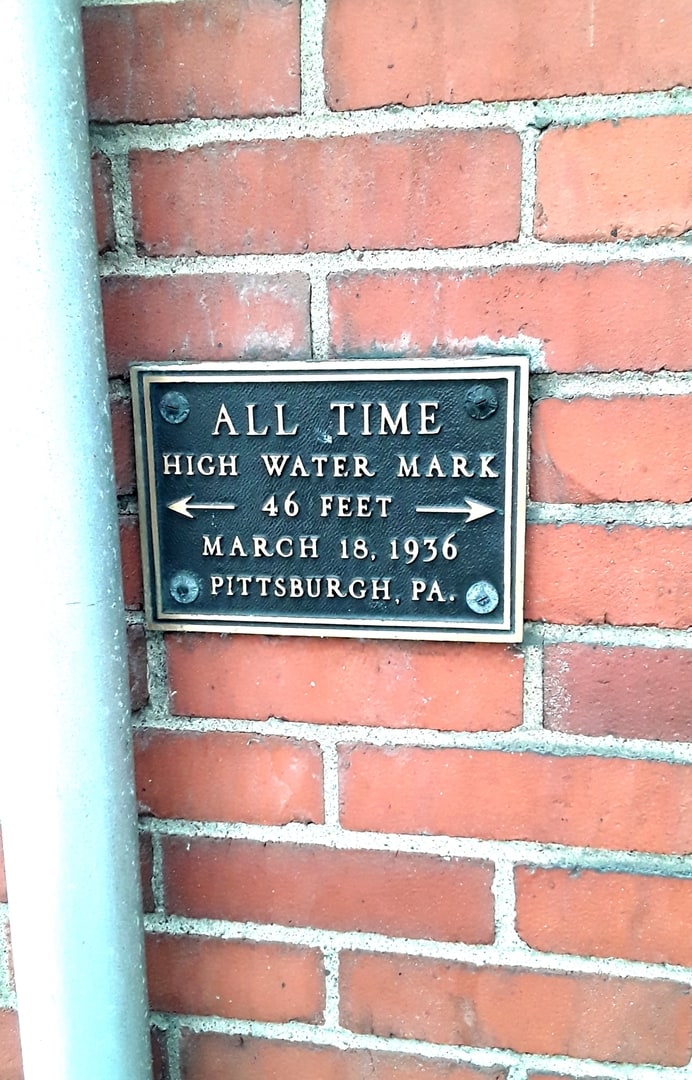 On March 17th, 1936, a frosty winter was succeeded by driving and copious rain and rapidly warming temperatures. Ice and snow melted swiftly, and flowed into the Allegheny and Monongahela rivers, which rose, and kept rising, and kept rising. The next day they reached the greatest recorded point to which they’ve ever been- the High Water Mark. Flood stage level downtown is 25 feet; on March 18th they hit 46 feet. Four grueling days later they receded to 24. Almost seventy people and over 100,000 buildings met their end, with damages equalling a contemporary cost of over $4 billion dollars. Electricity was out for over a week and Pittsburgh was secured by the National Guard. Four markers in the area show how far the waters went in the worst flood in Pittsburgh’s history. It’s something to think about, the impact that this event had on everyone’s lives. It’s also worth thinking about that eventually we recovered.