Here’s our guide to navigating the new menu options, the expanded beer selection and the massive space at Cinderlands Warehouse in the Strip District. Opens Tue, May 7.

Published on Tuesday, May 7th, 2019
by Aadam Soorma

Today’s special edition of ABV walks through Cinderlands Beer Co’s new location in the Strip District (inside the former Spaghetti Warehouse). This weekly series will return to its previous format (highlighting ONE Pittsburgh-area craft beer) next week.

Check out our past editions of ABV, here.

Everyone has been talking about Cinderlands

In December 2017, Cinderlands made a splash when they opened a brewery, taproom and kitchen space at 3705 Butler Street in Lawrenceville.

The Untappd tribe (approximately 20,000 users have ‘rated’ Cinderlands) has propelled them to a 3.86 out of 5 on their rating system.

And the kitchen, in particular, has piqued the interest of Pittsburgh’s blossoming food faction.

Everyone, it seems, has been eagerly awaiting for the expansion announcement.

Here’s our walkthrough of what you can expect at Cinderlands new location in the Strip District.

When will Cinderlands Warehouse open?

Located at 2601 Smallman St, the Cinderlands Warehouse is soft launching today (Tuesday, May 7) with a grand opening set for this weekend (Friday, May 10 and Saturday, May 11).

Per Sara Daversa, assistant general manager at Cinderlands, this is an expansion in every sense of the word.

“We are keeping the same core values from our Lawrenceville space. The beer hall vibes are communal; there is a focus on sharing and being together.”

“Our new location’s brewing capacity is nearly 5 times larger. We can also seat 3 times as many guests.”

Pick up a menu at either Cinderlands location and the naming conventions will finally make sense.

After a year and a half in Lawrenceville, mentions of [3705] – indicating the Lawrenceville address – will be paired up with mentions of [2601], the new Strip District space. Both spaces will remain open. Their website refers to the two spaces at Cinderlands 3705 and Cinderlands Warehouse.

“Our continued focus is on excellent service,” Daversa says. “We’ve been hearing from our neighbors in the Strip who’ve been wanting a cool lunch spot. So, we will be serving lunch every day except Monday. And we’ll eventually begin brunch service on weekends, but not right off the bat.”

Cinderlands 3705 (Lawrenceville) WILL continue taking reservations for groups of 8 or less on OpenTable, with the Cinderlands Warehouse accepting reservations in late May. Groups larger than 12 are encouraged to correspond via direct email for arrangements at the Warehouse.

A Tour of Cinderlands Warehouse

Heading to the grand opening? Scroll through our pics for a sneak peek of what to expect. 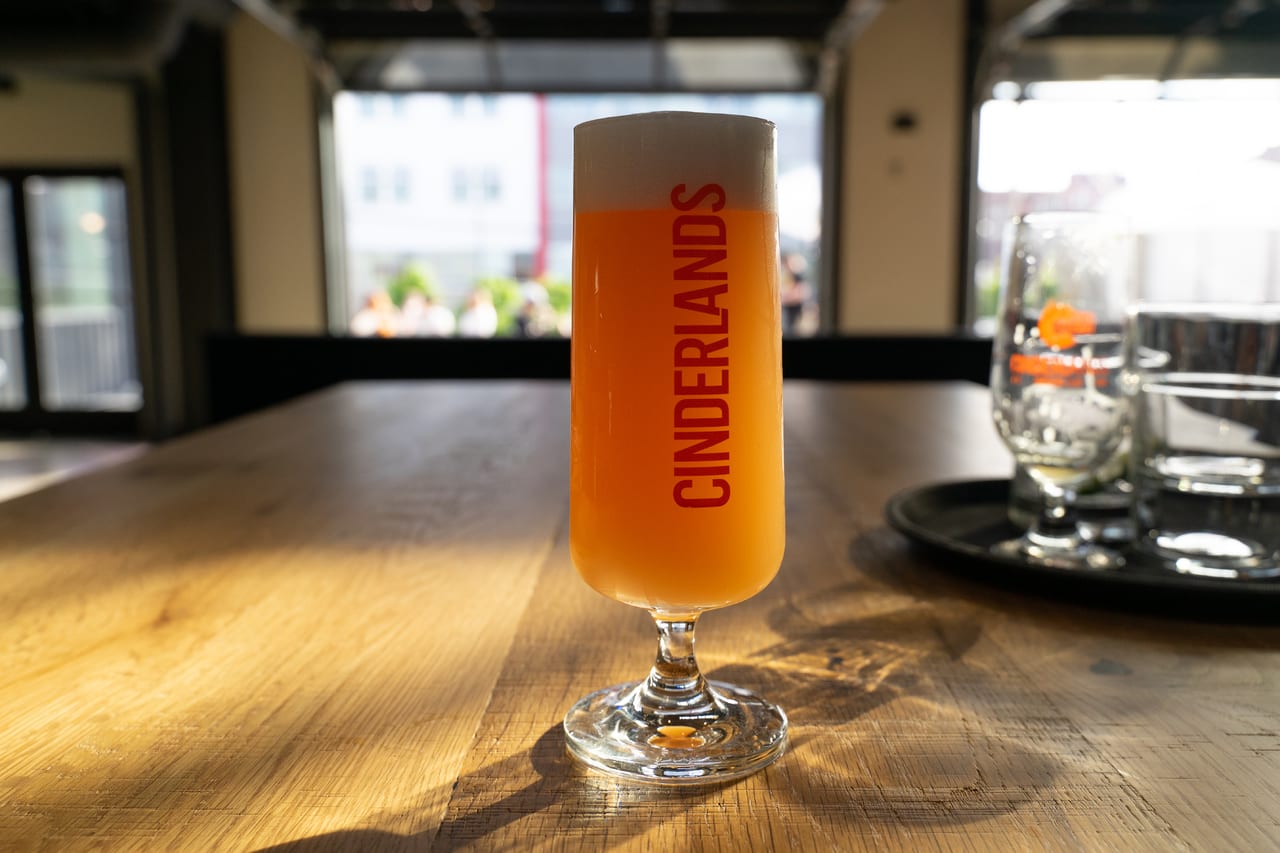 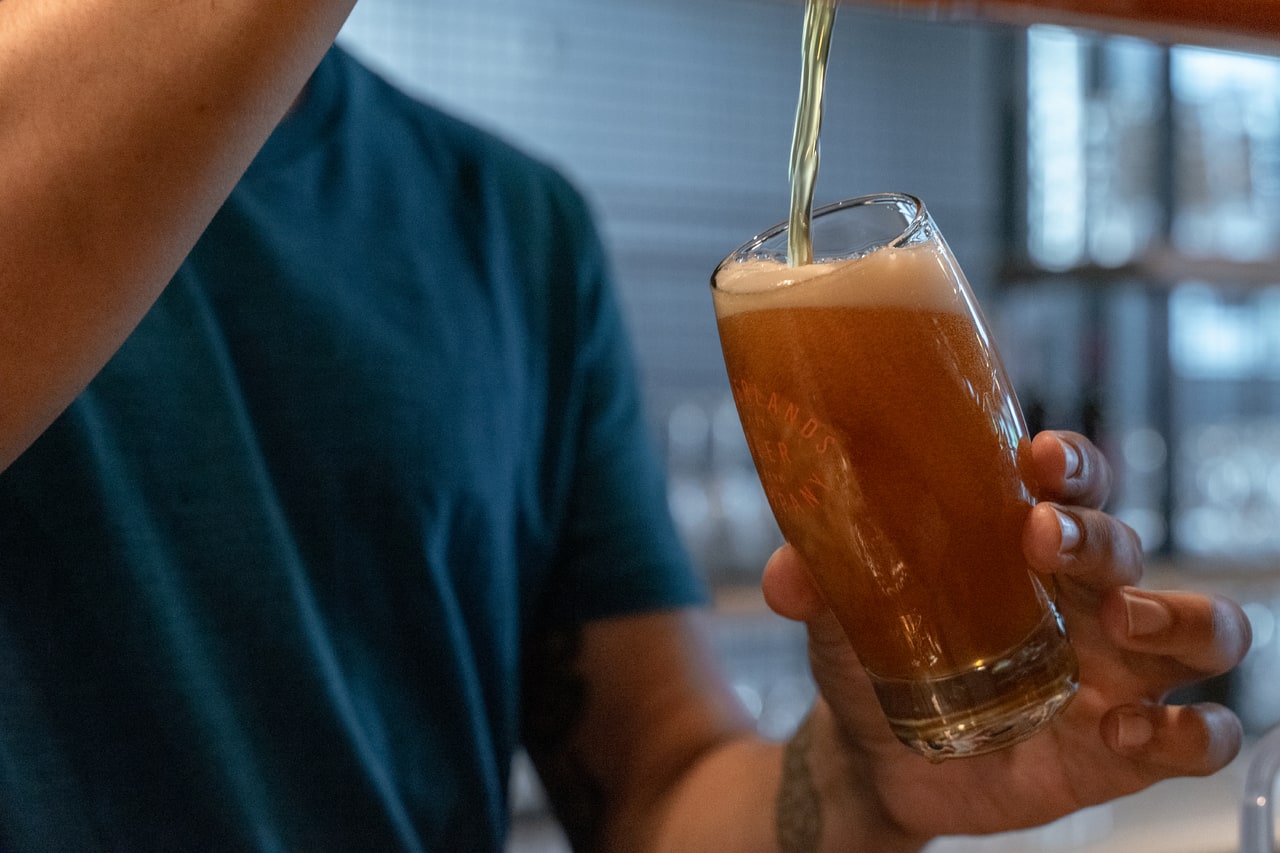 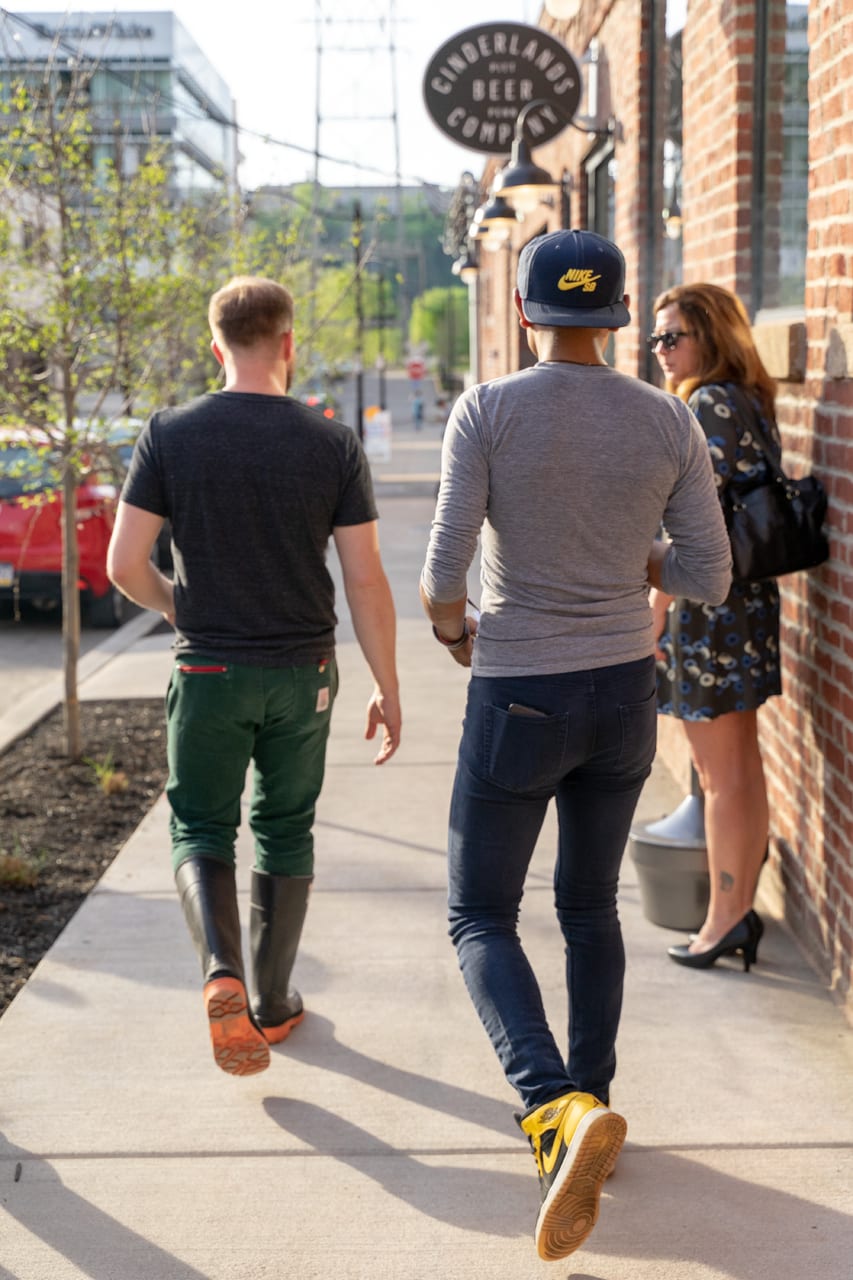 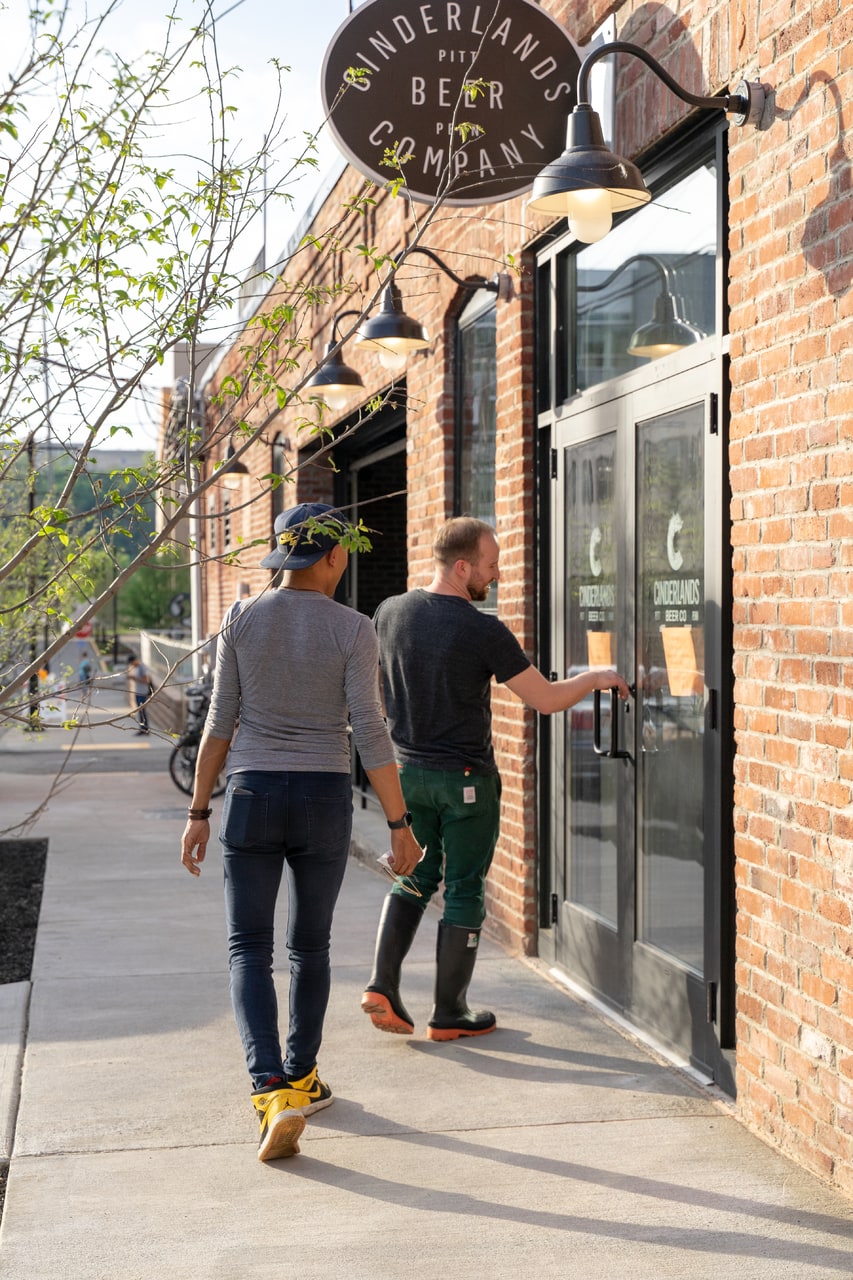 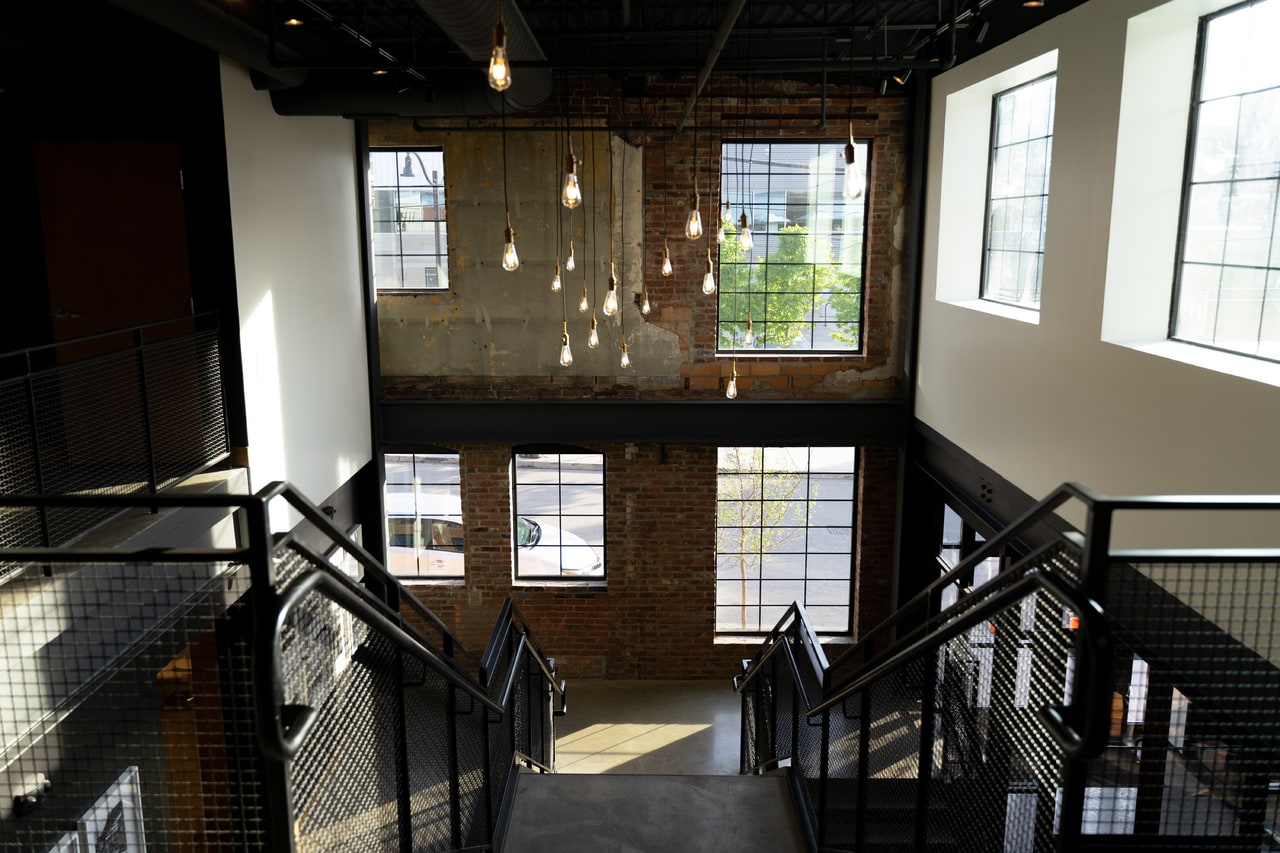 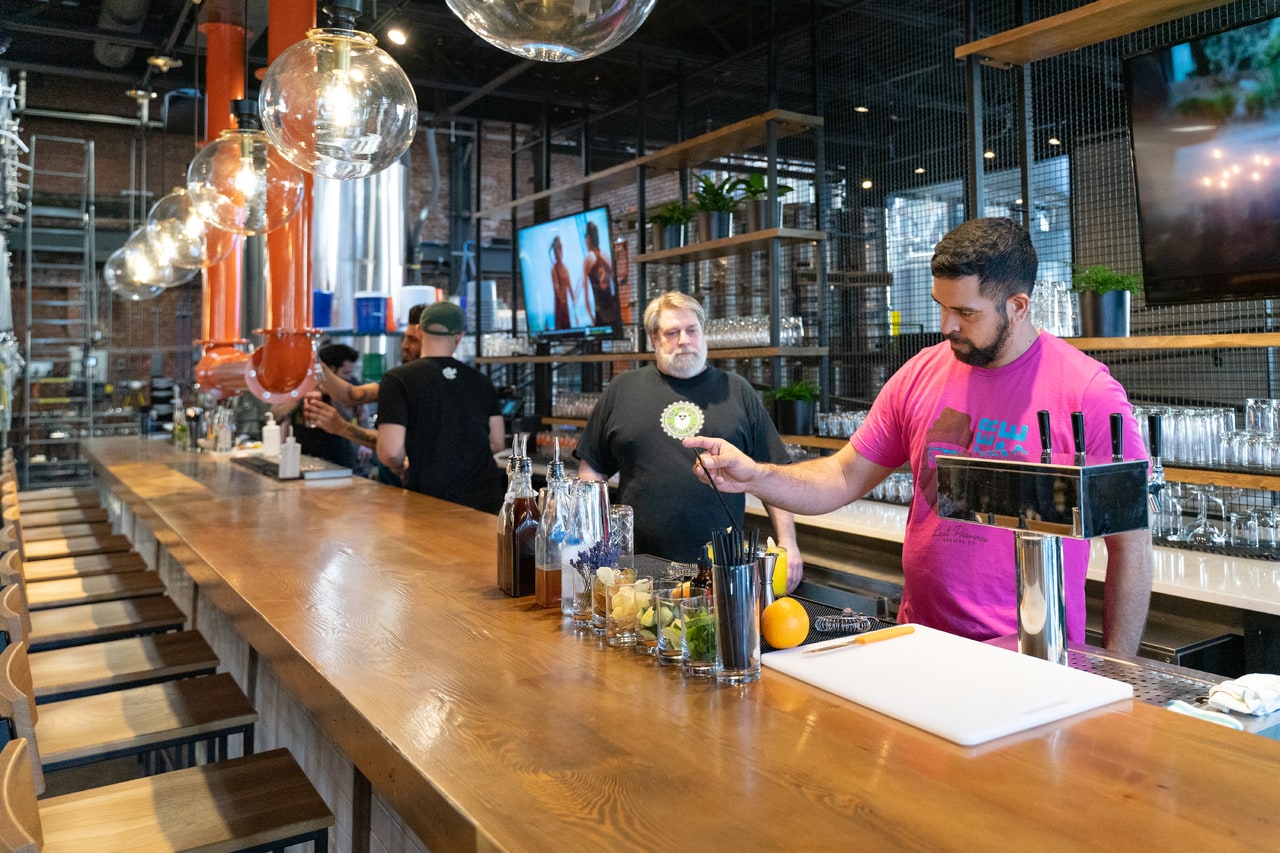 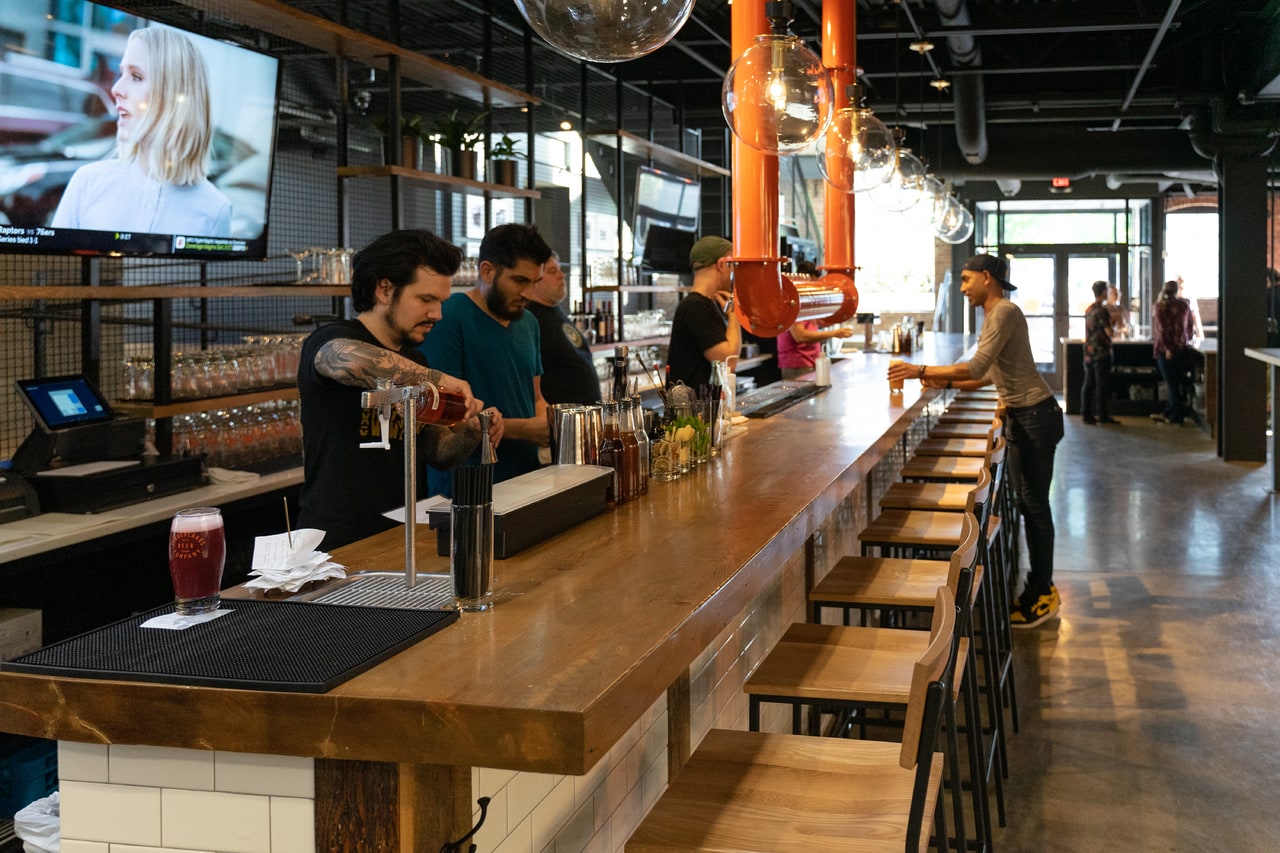 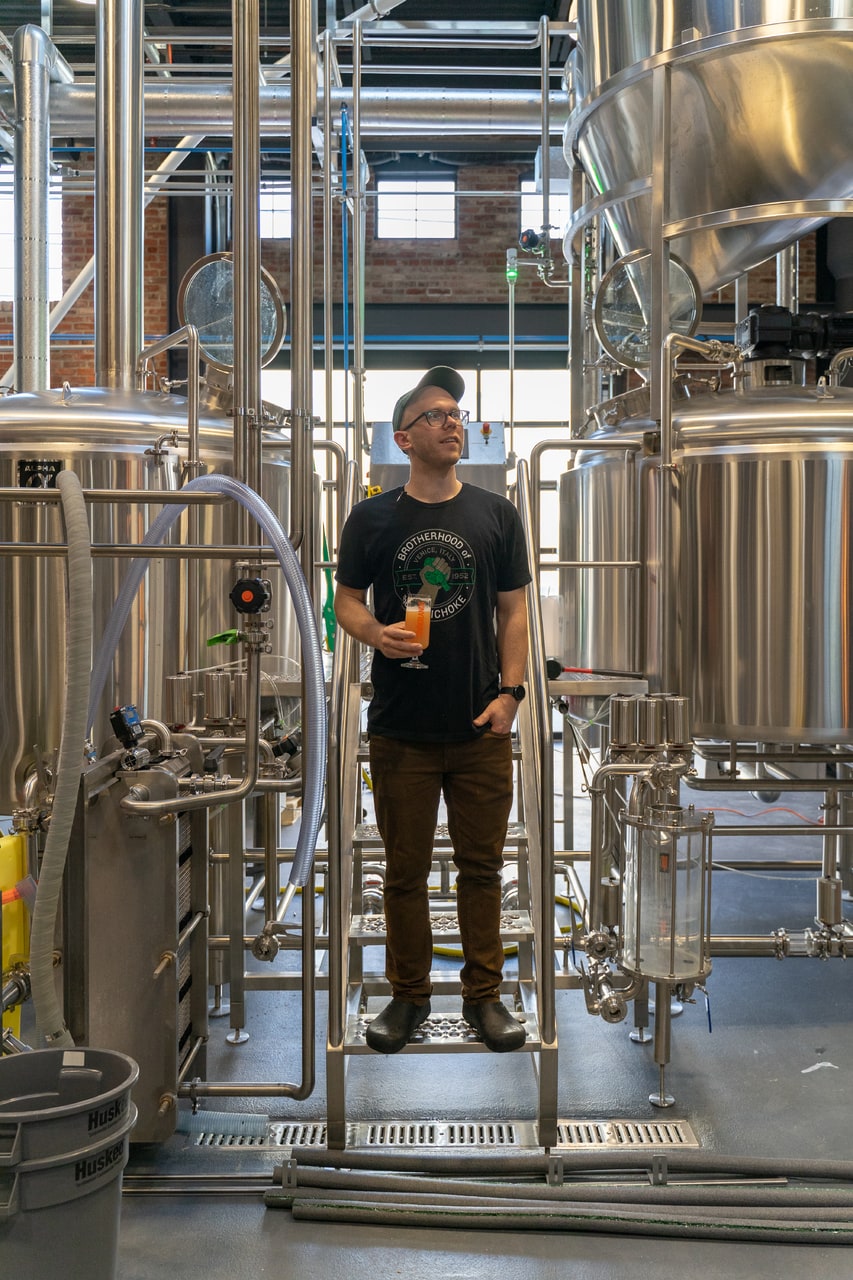 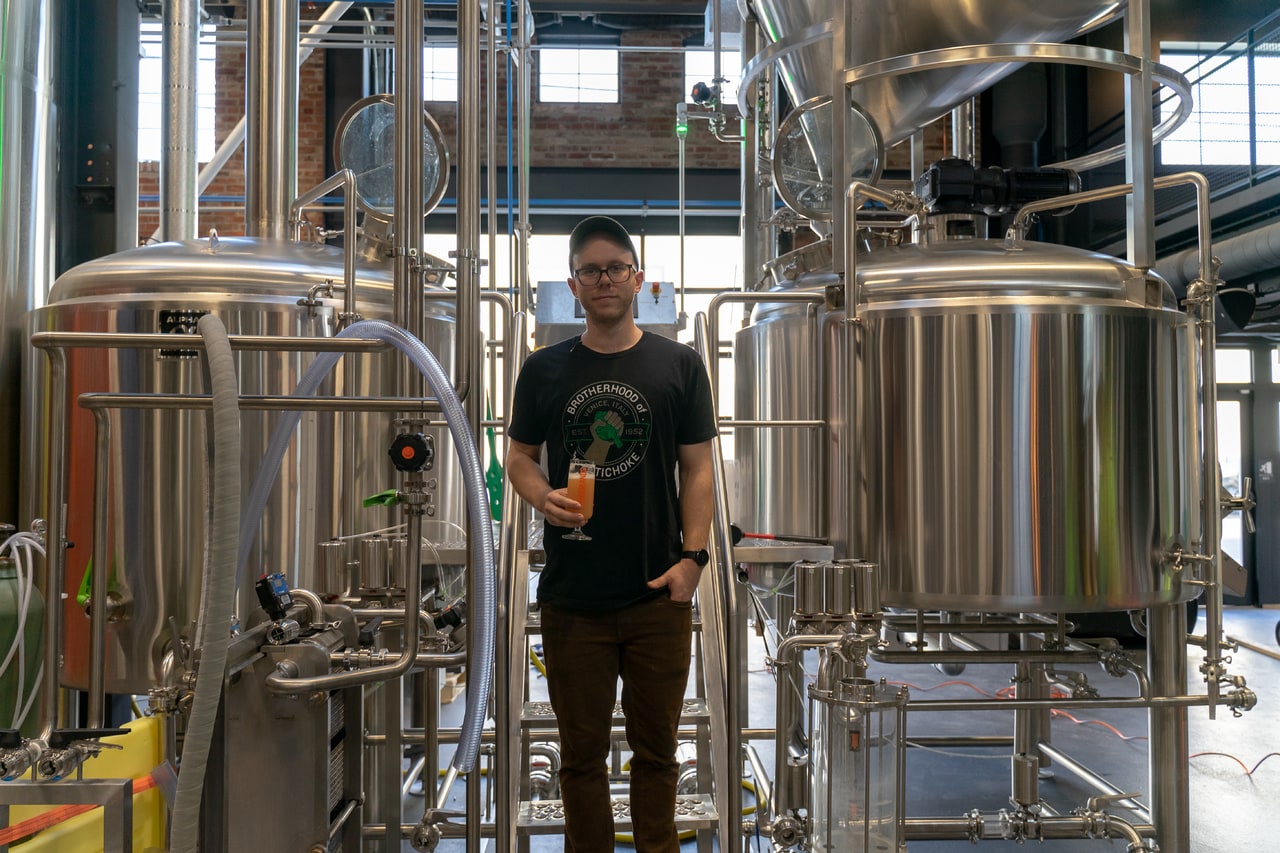 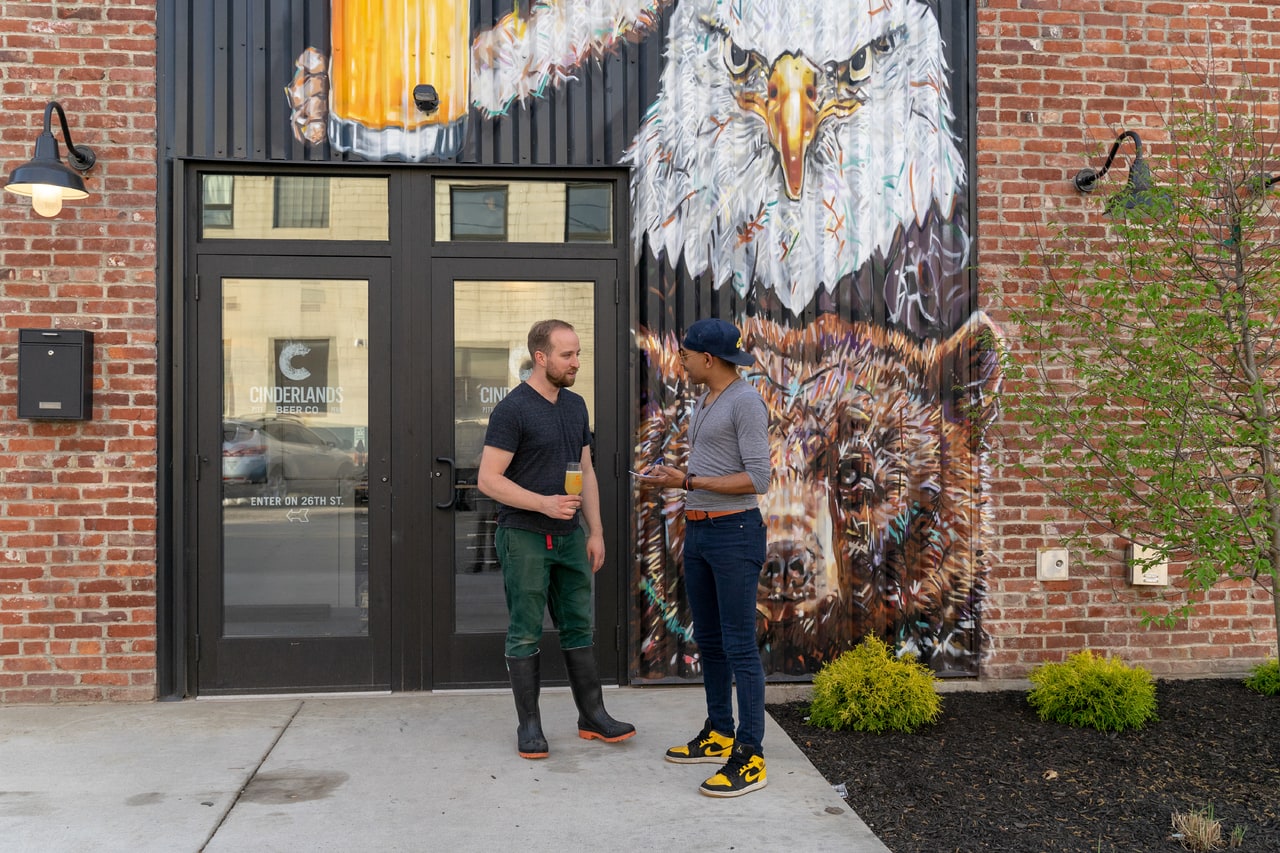 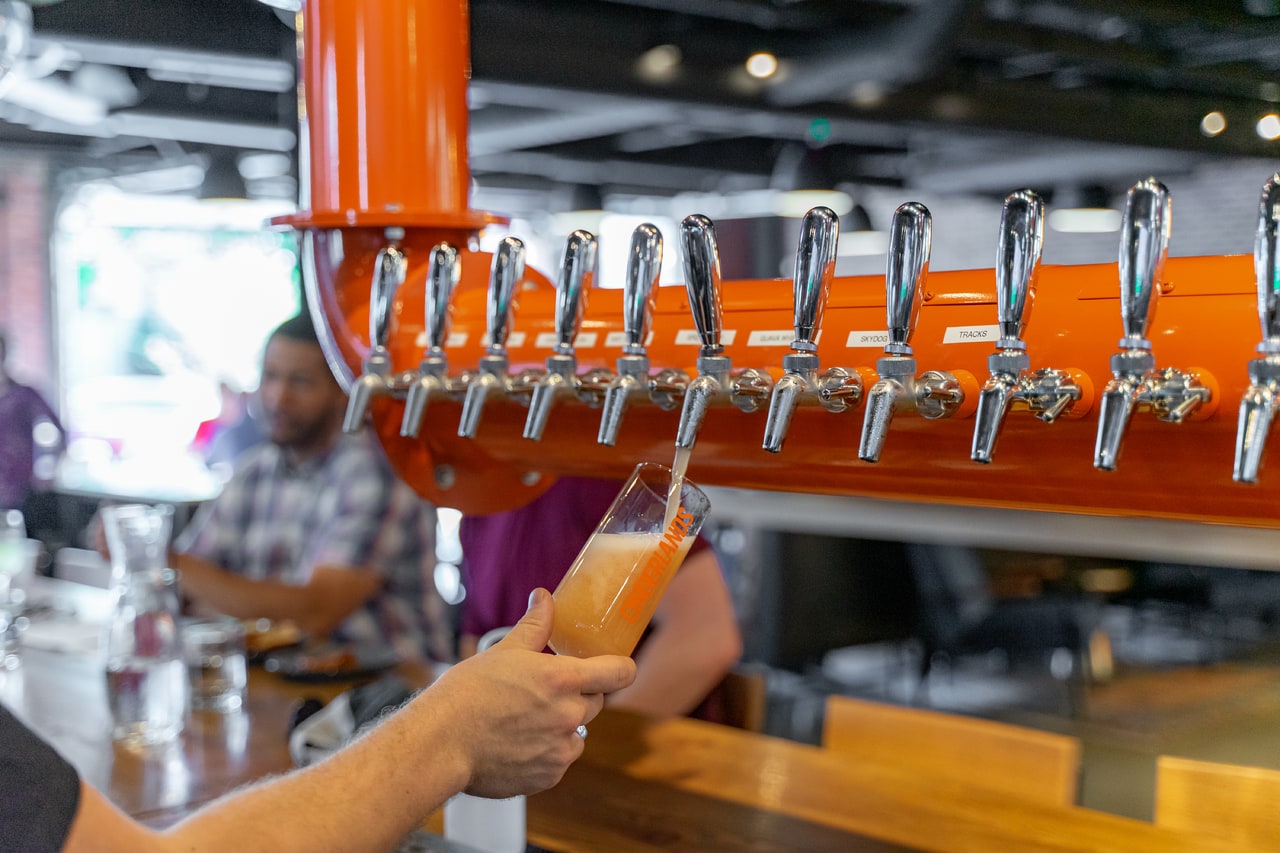 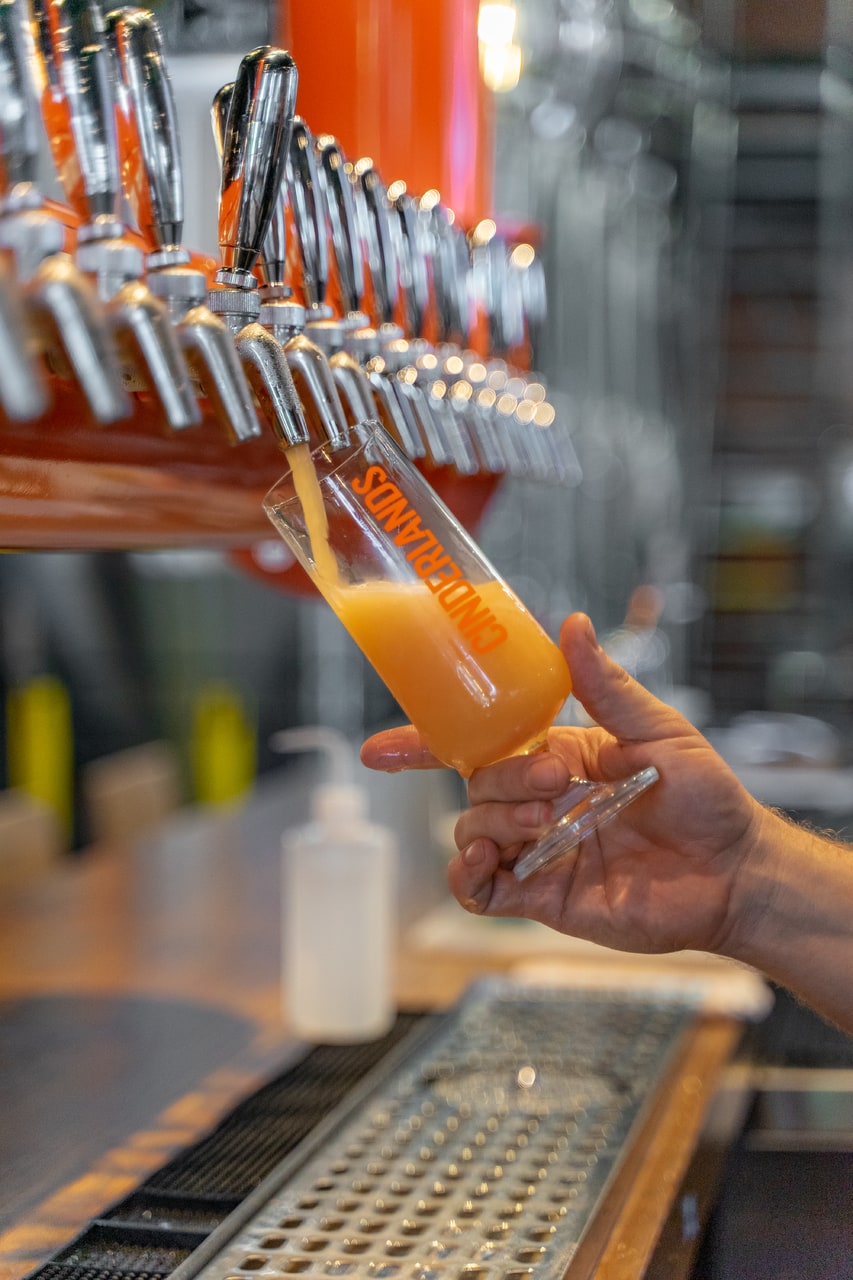 1 of 12
The Guava Whipper (Berliner Weisse) in the first floor seating area.

Cinderlands won the hearts (and stomachs) of Lawrenceville with its made-from-scratch, farm-to-table kitchen, led by Joe Kiefer (formerly of Meat & Potatoes).

Beer-pairing dinners and super secret burger nights propelled Cinderlands into the foodie conversations happening all over town. The food here is the real deal.

Today at #3705 we invite you to join us in all things savory as we present this week’s entry in the #SuperSecretBurgerClub! Every Wednesday our kitchen practices deep meditation to arrive at a delicious nirvana of culinary indulgence. This week we are featuring a Steakhouse Burger that you will for sure need a fork for #forkyeah – #SSBC – Burger #51: two beef patties / bacon / Raclette cheese / sauteed king oyster mushrooms / crispy buttermilk onions / steak sauce / @dukes_mayonnaise all on a Martin's @potatorolls – Paired with Skydog IPA or Mazza Vineyards Cabernet Franc 2016 – Available by request at 4pm. #cinderlandsbeer #burger

Feeling hungry for something a little bigger? Their large plates will include:

Other handheld goodies will include:

They’re planning to roll out some desserts as well, including:

Our beer recommendations for the Cinderlands Warehouse launch

Out of the eight beers Cinderlands Warehouse plans to debut upon launch, we have four recommendations – arranged by increasing order of gravity.

Not into beers? Cinderlands boasts an on-staff sommelier trained in PA-based wines. You’ll find wines from Lancaster, Lehigh, Erie and everywhere in between.

Know Before You Go

Parking in the Strip can be exceptionally difficult. If you plan to drive to Cinderlands Warehouse, they will validate a limited number of parking tickets from the garage next door called “The HUB” (at 26th and Railroad St). There are also some street spots (but not many). It’s a good idea to bus here on the 91 or 88 line. Or just catch a ride share / Scoobi.

Also, Cinderlands will release more information on can releases soon (keep an eye on their social media or subscribe to their email newsletter). During launch week, they plan to fill 64-oz (clean) growlers and 32-oz crowlers for folks to take home (per their normal policy). Rumor has it there MIGHT be a limited run of Skydog IPA 4-packs in cans (to-go) on opening day as well.

And finally, when you’re walking through the massive build out of this former Spaghetti Warehouse…enjoy this fun fact. The Cinderlands Warehouse building was originally built in 1871 as Pittsburgh Steel Casting.

How Pittsburgh of Cinderlands to take a massive, rumbling space and breathe new life into it. Literally from the cinders up.

All photos by Pat Hogan.