Take a look inside Lawrenceville’s cat cafe where you can enjoy snacks, have fresh coffee and walk out with your very own adopted fur baby.

I have an unusually immense respect and deep reverence for cats and cat people. My fate of becoming a cat lady was predestined by my mother. Cats were preternaturally drawn to her, and she to them.

On her honeymoon, for example, she and my father would visit their favorite twee bistro (well, this was Australia in the ‘80s, so maybe less twee and more an oddly interpretative French café where an 18-year-old Nicole Kidman was testing her acting chops with a Parisian accent while waitressing) and sit in front of the massive windows to where, nightly, more and more cats appeared and plopped down outside directly in front of my mother. Not only would the cats linger for the duration of their meal each night, but the same gaggle of cats would somehow find my mother in the morning at coffee shops and follow her through alleyways. I inherited this inchoate cat attraction, and at any given time at any given home I have occupied have found no less than three feral cats squatting near me, in addition to the two to five I have kept as pets.

Cat people like my mother and I often are ridiculed or scoffed at, but as of late, the tides seem to be turning. Not only are cats internet commodities, but a recent trend of cat cafes has been gaining wild popularity. It makes sense that the rash of cat cafés opening in the past few years would be a phenomenon that would speak to me on an intimate level. Originating in Taiwan in the late ‘90s, cat cafes spread like wildfire throughout Japan, numbering over 150 by the early-aughts, and quickly started popping up elsewhere internationally like Spain, Hungary, South Korea and the U.K. Pitifully tardy to the feline party, North America jumped on the cat café bandwagon in 2014 starting in Montreal, then in the states (in the heartland of twee) and hip Oakland, California. Cat cafes typically house several cat from shelters in a separate visitation/socialization area (so don’t worry, the cats aren’t your waiters are looming behind toilets to attack you at your must vulnerable), and provide the opportunity to adopt any of the felines-in-residence.

Not to be behind the kitty culture times, Pittsburgh has become one of the few U.S. cities not in California, New York or the trendier quadrants of the Pacific Northwest to house cat cafes, and guess who could not be more thrilled. While Colony Cat Café in the Strip continues to enjoy the momentous success it has had since it opened, a new kitten on the block, Black Cat Market, has been making waves in the cat café world, and its successes as a both a multifaceted café/cat-parlor, and as an adoption liaison for countless fur-friends.

“Indigo and I met through the local DIY music scene. We both have experience booking shows,” Ciotoli remarked. “Indigo still volunteers on the board of directors at The Mr. Roboto Project, a music venue in Garfield. We really bonded over our love of animals, the ‘Lord of the Rings,’ and helping people. We often tag-teamed on organizing benefit shows and fundraising events for local charities.”

Bonded by the holy trinity of Hobbits, animals and giving back, the duo started to speculate on a future that could involve feline business ventures.

“I think we are hitting the three-year mark since we first started discussing opening the Black Cat Market,” Ciotoli explained of Black Cat’s origins. “I had just graduated from Point Park and Indigo was soon going to be graduating from Chatham, and we were casually talking about our future plans. Somewhat jokingly, we were like ‘let’s open a cat café! We love cats and coffee!’ After a few days of that stirring around in our heads, we were like ‘OK but really, we could do this.’ So we got cracking on a business plan and networking and here we are! It’s been a longer process than we would like, but I am chalking it up to a learning experience.”

As any small business owner (or oft-thwarted prospective small business owner) knows agonizingly well, the process of transitioning business plan to an actual brick-and-mortar, open-for-business reality can be purgatorial at best in Pittsburgh, with building inspections, health code restrictions and zoning laws putting a damper on the best-laid plans. After sloughing through the delays, Black Cat Market triumphantly opened in late 2018, advantageously nestled in the heart of Lawrenceville (across from inkadinkadoo and about one block from Blue Moon) and Ciotoli and Baloch were soon joined by gifted barista and fellow feline enthusiast Alexandra Zimmerman to manage Black Cat’s forthcoming full coffee bar and current snack and drink menu (which includes cold brew and draft lattes from La Colombe and local iced tea from Treecup Tea).

Perhaps what makes Black Cat so rare in its vision and operation is the team’s steadfast commitment to celebrating and emphasizing diversity, and uplifting all voices (human and cat alike) in everything they do. This is an ethos that starts, of course, with the cats. All the fur-pals are blessed with some of the spunkiest names befitting their distinct personalities – like Jaime Lannispurr, Klondike, Sunshine, Buck and Brad Pitt (far cuter than the human, to be sure) – but, more importantly, have been rescued by New Kensington-based Frankie’s Friends from typically inhospitable living conditions. “[Frankie’s Friends] specialize in cats from tougher situations such as hoarding, neglect, injured strays, etc. We LOVE working with them, it’s the best partnership we could have asked for. The folks at their facilities, mainly Katie Smith who is the director of adoptions, pick out kitties who they think will be comfortable in our cat room and send them our way!”

The cats hang out in a cat room where you can choose to socialize or sob softly at their overwhelming cuteness (but maybe try to keep your public sobbing to 15-20 minutes, just speaking from experience), but can also adjust and acclimate to their new surroundings and new cat smells in a safe room, well-stocked with food, water, litter boxes and blankets that smell like other cats. Arguably one of the most exceptional elements of Black Cat’s operation is the Kitty Rules Guide, a list that enumerates key cat socializing tips (if a cat is hiding, let them do so! Be gentle! Only feed cats cat food!) that place a preeminence on recognizing consent and boundaries that reflect rules for human conduct that the team at Black Cat ardently espouse.

All Black Cat fur-babies are available for adoption, a process that’s as simple and fair as possible. “If you’re interested in one of the cats, you email or Facebook message Frankie’s Friends, they send you an application, and you usually hear back within a day or two if you’re approved!” Ciotoli explained. “Kittens (cats under 1 year old) have an adoption fee of $100 and adult cats are $75. All of Frankie’s Friends cats are up to date on vaccinations, spayed/neutered, and microchipped, so the adoption fee is well worth it!”

As a complement to the proverbial feast of felines, the team at Black Cat has worked vigorously to be a venue for a bevy of events, calling on Baloch and Ciotoli’s background and expertise, all of which aim to illuminate diversity, eclectic voices and interests, and support various community causes. Remarking on Baloch’s efforts as lead event coordinator, Ciotoli stated, “From the beginning we’ve always wanted to center more marginalized voices, particularly women, people of color, and LGBTQ people. We also try to host a series of events during April (Sexual Assault Awareness Month) focused on survivors of sexual assault, with some fundraising for Pittsburgh Action Against Rape and other local organizations working for survivors. We’re always open to suggestions and are happy to talk about hosting events for the community! We have the space, we want to use it for good.”

Among some of the stellar events that have taken place at Black Cat have been local nimble wordsmith Dani Janae’s Fig Widow Reading Series (which supported African American survivors of sexual assault), a live recording of popular Pittsburgh-based podcast “THRIFTY,” Sexual Assault Awareness Month Coloring and Crafts event for survivors and supporters, and monthly art openings to promote and highlight new local artists. 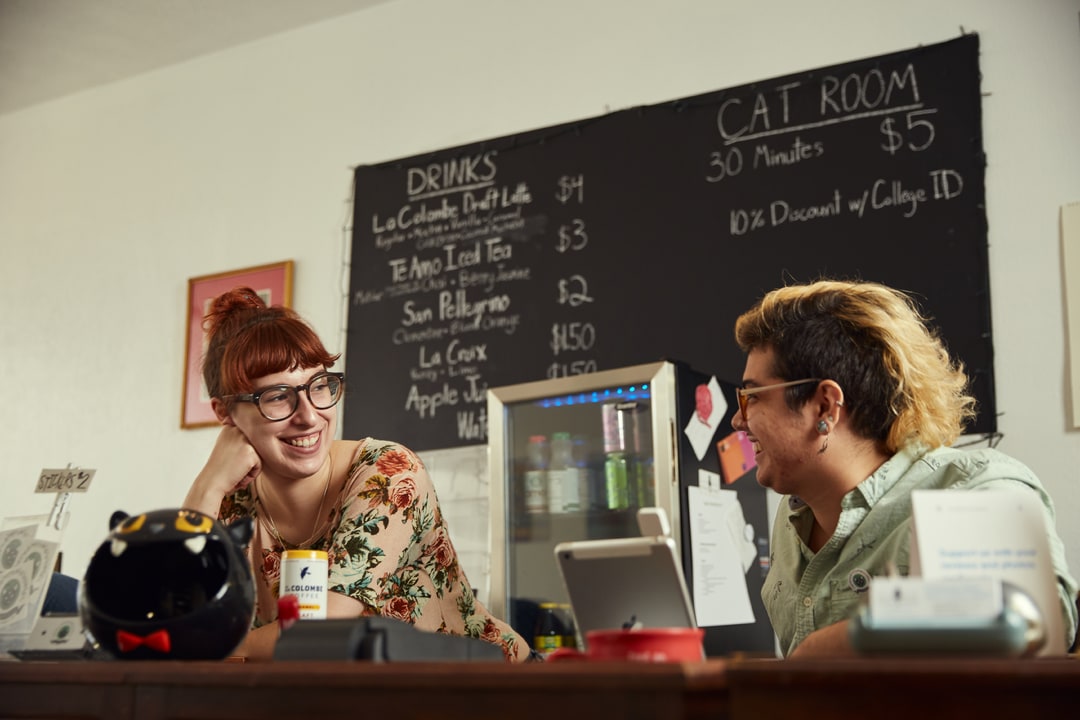 So perhaps you’re not a cat-lover or cat-sympathizer (that’s fine, I hope you pick out your handbasket for hell) – Black Cat Market offers ample enjoyment for all sorts of folks. You could attend a reading by local poets and/or writers, go to one of the many game nights or tarot-card events, or just hang out and read a book in the café and support a local, female-owned business dedicated to serving animal and humans alike.

And for all you feline-fanatics, stop in and enjoy the many scientifically proven, salubrious delights of pallin’ around with cats (like lowered blood pressure, and overall feelings of joy). You might even meet your new “furrever” friend, like Ciotoli’s personal favorite, Twiggy: a scraggly, one-legged black cat with FIV+ rescued by Frankie’s Friends who was immediately adopted by someone who fell in love with his picture on Black Cat’s Instagram (a wonderful source of cuteness inundation if you ever need instant gratification). Maybe Hodor, Larry, Arya or Venus could be your new best friend, and you could be the next to join the 80 adoption successes Black Cat has achieved in its short time being open.

Don’t “paws,” scamper over Black Cat Market, already (did you think I wasn’t going to close with a pun?).

Black Cat Market is open Monday-Friday 11 am to 6 pm; Saturday and Sunday 11 am to 4 pm. For more information on events and available cats, visit their website.

-yawn- The kitties are all hitting the hay for today, but we’ll be ready to play again tomorrow starting at 10am! #catsofinstagram #catcafe #pittsburgh #adoptdontshop #rescuecat #sheltercat